I saw it myself late last Thursday on a delayed flight from Chicago to Fargo. And to quote a 35-year-old hit, “It was like lightning / Everybody was frightening / And the music was soothing / And they all started grooving…” 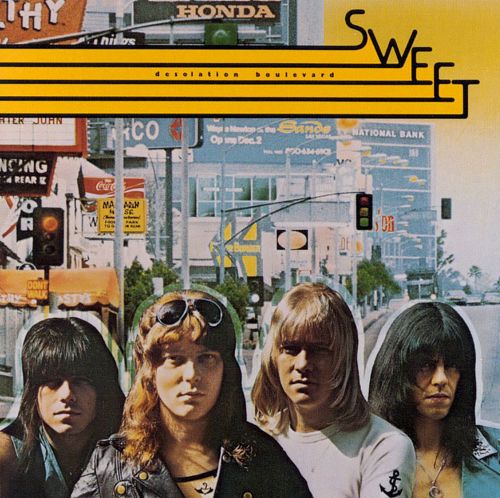 Jump back to 1973, shaggy hair, post-political-activism youth and drugs that have become more than harmless recreation. (I was only five years old, but never mind; you can read all about “The Scene” on the Web these days.) English glam rock band The Sweet has just released “Ballroom Blitz.” The song has soared to number 1 in Australia and hit number 2 in the U.K. In the United States, it will become one of the biggest hits of 1975.

We’re red-eyed, beat and bemused by some commotion close to the United desk, where two women in their late 50s or early 60s are fawning over a scraggly haired man. He’s sporting a black jacket with stylized, blood-red letters on the back: “Rock ‘n’ Roll Religion.” The wrinkles on his face belie his age; clearly, the long locks are more grey than brown these days.

Several men seated nearby in black Pink Floyd and Harley T-shirts, black jeans and Puma rocker shoes joke around while closely following the groupie exchange. Rock ‘n’ Roll Religion signs a scrap of paper for one of the women, takes her hand and kisses it. As they walk away, she and her giggling friend brush past me. Clearly, for tonight at least, “…she’s the passionate one, oh, yeah.”

“I’ll give you a buck if you ask those women who they are,” says my companion, motioning toward the old dudes in black.

“The Sweet,” says Religion with the flourish of a hand, which happens to be holding a tiny bottle of Jack Daniels, Smirnoff, Southern Comfort or some such.

There’s a collective eye roll at the mention of The Sweet’s most popular song. Religion counters with a quick list of some of the band’s other, less-known singles. Sure, I say, sure.

We chat a few minutes. Turns out they’re headed for Walker, Minn. to perform at Moondance Jam. The band has been delayed for hours, just like us. If the plane isn’t cleared soon, Religion jokes, they’re going to rent bicycles. I laugh, shake his hand, wish him a good show in Walker.

I report back to my colleague, who shoves a couple of bills toward me. I glance back at Religion – keyboardist/guitarist Steve Grant, I think, but it’s hard to tell – and wave away my winnings as he downs the contents of the little bottle.

Three decades after hitting its stride, The Sweet is worth much more than two bucks. I paid eight to download the band’s greatest hits for my iPod, and it’s $85 for a single-day pass to Moondance to see them play, even though only one of four 1973 band members is still in it.

Also published in The Forum, Fargo, under the headline, “The Sweet older, but still Sweet” on July 20, 2008