Got a shoutout in Bob Lind’s “Neighbors” column in yesterday’s issue of the local paper,The Forum, Fargo. The column references a story I wrote back in 2001 (the Lind column was off by a couple of years) forNDSU Magazine about the night a North Dakota Agricultural College extension agent and his friend from South Dakota State College recorded Duke Ellington and his orchestra at the original Crystal Ballroom in downtown Fargo. 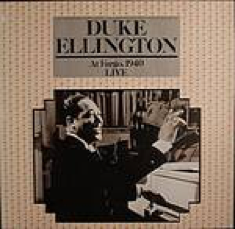 I had a great time researching and writing that story. I was able to speak to Jack Towers, who was living in Maryland at the time, Dick Burris’s widow and others for firsthand information and background. Jack died a few years after the first version of that story was published, but told me in one of our conversations that he was having fun reliving that night. I wasn’t the only one contacting him about that time, either; it was around a milestone anniversary of the night he and Dick recorded what became “Duke Ellington at Fargo, 1940 Live” a recording that later won a Grammy Award. He was enjoying a little bit of the spotlight.

In addition to getting versions of the piece published in The Forum, South Dakota State University alumni magazine, State, and in the Sioux Falls Argus Leader, a framed version created by my friend Rob Larson hangs in a case opposite the doors of the new Crystal Ballroom in the Ramada Plaza Suites, Fargo. It’s displayed with other Ellington and Crystal Ballroom memorabilia and photos.
Anyway, fun to get the shoutout all these years later (read it, below). Thanks, Neighbor.

Some of you will remember “Sophisticated Lady,” “Take the ‘A’ Train” and “Satin Doll.”

They are three of the many hit tunes turned out by Duke Ellington and his band.

There was nobody bigger in the world of jazz in the 1930s and 1940s than Duke, who Neighbors brings up now because of an email from Alf Brooks, Winnipeg.

Alf says the December issue of the New Yorker magazine carried Ellington’s biography. It included this statement, in reference to his recordings: “His finest was made on a bitter winter night in 1940, in a Fargo, North Dakota, ballroom.”

Alf did his own research, found that the date was Nov. 7, and that the concert was released as an album in 1978 with the title “Duke Ellington in Fargo, 1940 Live.” Now he wonders if The Forum has more information on this.

Yes, it does, thanks to Martin C. Fredricks, who sent a story of the event to The Forum in 1999.

Duke and his band played in the old Crystal Ballroom, Martin wrote. They traveled to Fargo in a special Pullman car on a train from (guess where, Alf?) Winnipeg, where they had played the night before.

Dick wrote the William Morris Agency in New York for permission to do so. The agency said OK, as long as Ellington and Crystal ballroom owner Ralph “Doc” Chinn approved.

Dick and Jack got Doc’s permission, so they went to the Crystal early and found the band members on the stage playing cards.

The two visited with some of them, then tracked down Ellington and asked him for his approval to record the event.

Duke said fine, but he really couldn’t understand why they’d want to capture that session because, he said, his trumpet section was in “bad shape” because his veteran trumpet player, Cootie Williams, wasn’t there and was being replaced by a guy who’d be with the band for the first time that night.

So the men set up their gear. The orchestra played a couple of warm-up pieces. Then Duke sat down at the piano, the band played its radio theme, “Sepia Panorama,” and the show was on.

Some of the students danced under the lights reflected from the Crystal’s glass ball suspended from the ceiling, while others gathered around the stage to just watch what Martin called “the greatest band in the land swing the house,” even though the instrumentalists had to prop their sheet music on satchels because there were no music stands.

Stanley Dance, a free-lance writer and longtime Ellington friend who has written several books on the musician, said later that Dick and Jack’s recording “captured an evening when the orchestra was hitting all the notes; there are few live recordings (of Ellington) any better than this.”

In 1978, that recording won the Grammy Award for the best jazz instrumental performance by a big band.

And there’s a look back at a big night in jazz music for Fargo.
Since it occurred more than 70 years ago, it’s unlikely there’s anybody around who attended the event. But if there is, or if someone has a story about a relative or friend who was there, Neighbors would sure like to hear from you.