She died on Palm Sunday. I think that would have made her happy, as she drew her last breaths, knowing that she was going to die on a significant day on the church calendar. I held her hand all that morning. Now I hold the bean stone.

I’ve been carrying a rock around in my pocket for a couple of months.

The smooth, bean-shaped stone is about an inch and a half long, half an inch wide and five sixteenths of an inch thick. It’s smooth, like a worry stone. Not perfectly smooth, like the kind you’d find in a gift shop. But smooth in a natural way, with some imperfections and slight ridges that make you know it’s real. 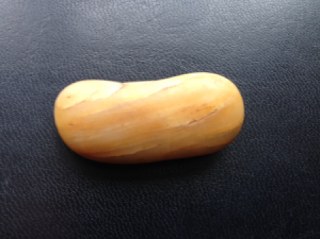 At night, the bean stone rests on my dresser along with my keys, watch and glasses. During the day it’s in the left-front pocket of my jeans. Every now and then I reach in to feel it there, or pull it out to hold for a while, maybe rub my thumb along its length as I imagine my mother holding it in the same way.

It happened to be Palm Sunday. I think that would have made her happy, as she drew her last breaths, knowing that she was going to die on a significant day on the church calendar. I held her hand all that morning and into the early afternoon until she was gone, and I think that gave us both comfort.

Now I hold the bean stone.

I found it on her dining room table the first time I entered her home after she passed on. It was almost hidden amongst papers and medications that she never had a chance to clear away. Maybe she found it in her garden, or out by her rhubarb stand, or maybe in the driveway. Wherever she found it, she liked it enough to carry it back into the house with her and keep it. I wish I didn’t have the bean stone. But I do.
I kept it for her.

When my father died in July 2003, he had a small jackknife in his pocket. It was the kind you’d find at the checkout lines in hardware stores – flip-out blade, serrated edge, plastic handle plates. Cheap but effective when you need it, and not so hard to replace if it gets broken or lost.
.

I found it when I was going through Dad’s things. I shoved it in my own pocket, and carried it there for more than two years. It finally wore out, plastic handles loose and blade without much edge anymore. That knife helped me through the hardest part after Dad died.

I still miss him every day, but the edge isn’t quite as sharp.

And now I have the bean stone, a small, tangible talisman I can hold on to as I make it through the hardest part of missing Mom every day, too.

Now I keep it for me.

One thought on “Sacred Things”