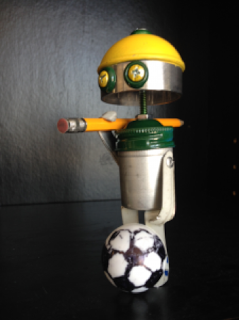 They’ve been rolling into our lives for years, performing tasks from the relatively mundane, like vacuuming floors, to the Jetsonish, like working as teachers’ aides in classrooms. With advances in artificial intelligence and new feats of engineering, Robots continue to get smarter and better and more useful for humans.

According to the experts, if robotics continues to advance at the current pace, it might not be long before bots will be able to score goals as effectively as Lionel Messi, and other machines will report the wins and losses.

RoboCup 2014 wrapped up in João Pesso, Brasil, last week, and the scientists, info technology experts and engineers whose bots participated have been sharing their secrets with each other since the whistle blew on the last match. In “Humans 1, Machines 7,” The Economist reported more than 150 teams participated in the event, which featured competition in a wide range of futbol-bot categories, from miniatures to humanoids. These bots are good, and they’re getting better.

In the “little league,” for example, the “…electromechanical kickers can fire the league’s orange golf balls at eight metres per second… they easily could  shoot harder if it were not for hardware-control regulations that set a maximum speed.” They’re also are learning, executing unanticipated plays that represent “…emergent behavior, a hallmark of artificial intelligence at its highest level.”

As futbol-bots have been kicking and passing their way to these unprecedented levels, writer-bots have been taking on basic reporting. “More News Is Being Written By Robots Than You Think,” is just one of dozens of news items and posts over the past couple of years about robots writing basic news pieces and press releases. In it, blogger Jason Dorrier highlights an L.A. Times reporter who, with the help of a company called Narrative Science, wrote an algorithm that was able to complete a short, fact-based, error-free piece on an earthquake less than four minutes after the event. “Kristian Hammond, cofounder and CTO of Narrative Science, thinks some 90% of the news could be written by computers by 2030,”  Dorrior wrote.  Hammond also “…believes a computer could write stories worthy of a Pulitzer Prize by 2017.”

Hold up. Basic news, sure. Formulaic press releases, OK. Pulitzer Prize? That seems like a stretch.

Two of my passions are soccer and writing. A.I. is cool, these robots blow my mind, and I’d love to see bots saving goals and writing news updates for myself. I also have no doubt the discipline’s pioneers will continue to refine robots’ ability to duplicate the basic mechanics of people. But in my view the nuances, creativity and limitations of individuals are the genius of soccer, writing and other human activities.

So far, no one is suggesting robots will be replacing the likes of John Steinbeck or Cristiano Ronaldo, but A.I. marches on. And in more and more instances, it dribbles and scribbles, too.