Fifty dollars was nothing to sneeze at in 1976. And to a 7-year-old newspaper boy used to spending nickels and dimes on Nu-Grape sodas and Marathon candy bars, it was an almost unfathomable amount. It was so much, in fact, that I didn’t dare keep it when I found the $50 bill in a gravel driveway on the edge of tiny Medora, N.D. 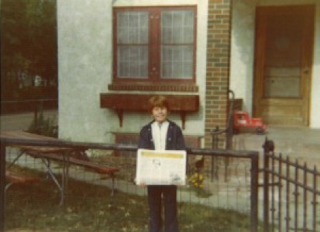 I was on my paper route, trudging through the dust after slipping a paper into a door, head down, thinking about who-knows-what, when a movement caught my eye. There it was, a half C Note, shuddering in the early morning breeze and sunshine.

I couldn’t believe my eyes. Fifty bucks! Wow! I picked up the bill and checked out the image of U.S. Grant. I hadn’t seen him up close before; heck, I’d never held that much money in my hand before, period.

I looked around to see if anyone was watching, then looked back at Grant. Maybe it was his eyes. Or perhaps it was his stoic, almost intimidating bearing. Or the grandfatherly thick beard. Whatever it was, something about our 18th president’s stare made me think I’d better not try to keep the money.

So I asked myself, what should I do? A 7-year-old’s logic:  this lost bill must belong to the owners of the closest home. It must have dropped out of his pocket when he pulled out his pipe, or slipped out of her hand while she carried in an armload of groceries, or blew out the window while they counted their stack of cash (adults do that, right?). Yeah, that’s it!

Since the closest house was the one I’d just delivered to, I doubled back, quietly reopened the screen door and slipped the $50 into the newspaper.

Later that morning – route done, Dad’s pancakes on the table and 10:30 Mass ahead – the phone rang. When Mom hung up she came into the kitchen. “Did you find some money this morning?” she asked me.

“What did you do with it?

“I slipped it into the Johnson’s paper,” I said.

“Well, I found it in their driveway. I figured it was theirs.”

“That was Mrs. Johnson,” she said. “They found a 50 dollar bill while reading their paper and can’t understand why it was in there. They wanted to see if you knew anything, because it’s not theirs.”

We talked about it some more, Mom, Dad and me, and they called the Johnsons back. The adults decided that, since I’d found it, the $50 should be mine if no one claimed it. Dad took the bill to the sheriff, who put it in his safe. “If no one claims it in two months,” Dad told me, “the sheriff will give it back to you.”

I don’t remember much more, except the two months felt like forever. I did, eventually, get the money. What I do recall is being reminded often that the Johnsons wouldn’t have had to call, but they did. They did the right thing and, because I had tried to do the right thing, too, I was being rewarded.

I never did tell anyone that what I really wanted to do, and badly – keep it. Looking back, I’m glad I didn’t pocket the cash.

It was a good lesson, one I forgot for a while as a teenager but came back around to as an adult. Now my wife and I try to teach it to our three kids through situations in their own lives. As we do, I often think about that brilliant moment of discovery in 1976, how I got a little Extra! out of that morning’s paper, and how I learned even a small act of kindness makes a difference.