No one has called me “Pops” to my face yet, but it’s only a matter of time. 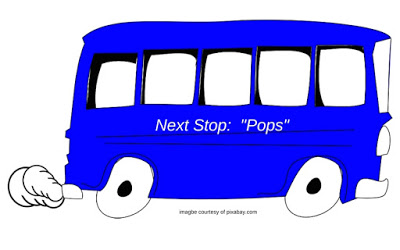 A young colleague recently showed me a graphic meant to accompany a client’s social media post. It dealt with clean water in underdeveloped areas. Prominently featured was a blue bus. I shook my head. “Makes me think of Jim Morrison,” I said, assuming the underlying narcotic use suggestion was obvious. “We don’t wanna go there.”

I could have been speaking Swahili. Blank look. “Who?”

“Doors to what?” Those were her words, but her expression clearly said, “Look, Pops, no one here understands you.”

The line is from “The End” by The Doors, Jim Morrison, vocals. Many have interpreted it as an allusion to oxymorphone, a street drug in the late ’60s.

I refrained from digging myself in deeper, but I swear the grey in my goatee was greyer when I looked at the mirror that night.

So. Kids these days….

They just don’t get it.

The world of entertainment was expanding rapidly in my formative years, the ’70s and ’80s. I became a pop culture absorber and regurgitator, and today pop references make up a huge part of my small talk and humor repertoire.

Mine was the first generation to have cable TV as a common fixture in our living rooms, bedrooms if our folks had cash. We watched new episodes and reruns of shows like M*A*S*H, Barney Miller and Cheers repeatedly and could – still can – quote them line for line.

“Video Killed the Radio Star” launched MTV on Aug. 1, 1981, and when we got home late on Friday nights, we’d flip between that and Friday Night Videos. “Fish Heads,” a warped visual representation of a Barnes & Barnes song, was my favorite. Don’t even ask.

And so it went, through the’80s and the ’90s, on into the oh-ohs (That didn’t really catch on, did it? Makes for a great pop reference, though.), right up to the twenty-teens, aka the ever-present present. And here I am, face-to-face with generational angst.

The kids… er… um… young adults around me have never even heard this or that line from an old song, show, TV commercial or movie, let alone get how it relates to the present moment and is, doggone it, funny. Because, “…doggone it, people like me!.”

Dare to share at a situationally appropriate moment – “Where’s the beef!” – and I find myself looking into bewildered or, worse yet, smirking faces.

I can’t blame them. They were only 7 or 8 years old in 1999. They might have partied, but the beverage of choice was a yummy mix of 7-Up and rainbow sherbet.

7-Up? Isn’t that something you only drink when you have an upset stomach, Pops? Hit me with a Red Bull, will ya?

Make air quotes around a spoken word like you’re Bennett Brauer (Chris Farley) in the hilarious Saturday Night Live sketch – “So I don’t (air quote) shower (air quote) on a regular basis…” – and you’ll be disappointed.

No way they’d ever get “Flah!” That’s an homage to what is, in my opinion, the funniest movie scene of all time. It’s from 1968’s “The Odd Couple.” Felix (Jack Lemmon) is in a restaurant with Oscar (Walter Matthau), and Felix starts making an obnoxious noise – “Flah!” – in an attempt to clear his sinuses. Loudly. In public. Over and over again. It’s gut-busting.

The film came out the year I was born, but like I said, reruns and VCRs….

Even 1990s Seinfeld references fall flat. “Question is, are you master of your domain?” “Not that there’s anything wrong with that.” and “It. Out.” mean absolutely nothing to a 20-something in his first professional position, but let one of them fly at the right moment and my wife, Cassi, and I will be near tears.

I always wish she was with me to share the laugh when I recognize one of my favorite ’80s pop songs, Muzak-ized, coming through grocery store speakers.

See, it really takes just one. (That’s another Pops reference, this one from “City Slickers,” when Curly (Jack Palance) holds up his gloved index finger and tells Mitch (Billy Crystal) that the secret to life is “One thing. Just one thing.”) What I mean is it just takes one person to understand where you’re coming from, put up with your pathetic puns and generally let you by with your crotchety crap.

From time to time Cassi and I even go back and forth with references to – gasp – novels.

Which reminds me of my favorite semi-political cartoon ever. This guy is kicked back in a recliner, beer in hand, watching television. The dialogue balloon issuing from the screen says, “Next on Oprah, PEOPLE WHO READ!”

I admit, a list of present-day references I don’t get would go on longer than a ’70s hits collection. Which, by the way, I listen to often.

So. Middle-aged people these days….

I just don’t get it.

Pops? At 48, I have to say no, not just yet, but I truly is only a matter of time. When the loafer finally fits, I’ll slip into it without argument. Just don’t be surprised to hear a contextually relevant sitcom line while I’m at it.