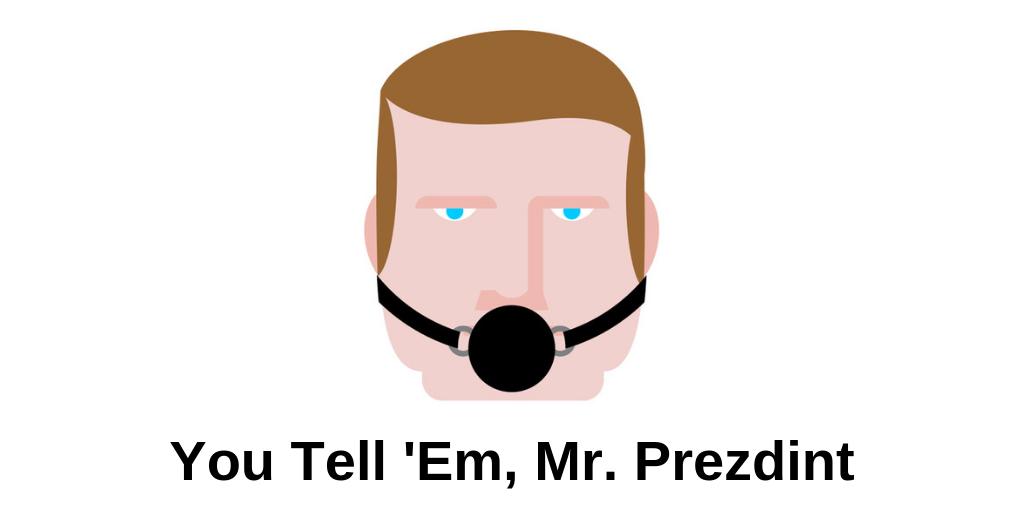 Them recent gag orders from the White House – I’ve but two words:

The Don – that’s what I call Prezdint Trump – said he’d create jobs, right? Well, lemme tell ya, the ping pong ball, tennis ball, cord an’ handkerchief manufacturers of the good ol’ USA are tip-toein’ across their shop floors on this day. Effin’ A!

’Cordin’ to the U.S. Office of Personnel Management, the zecutive branch employed 2.079 million people in 2014. That’s a whole lotta folks to gag.

What’s ‘at? Nah, heard it from someone. Red cap. Awesome guy. Who you think has time to be lookin’ up that kinda crap, anyhow?

Way I see it, there’s two good ways to do it – either stuff ol’-fashioned handkerchiefs in their mouths or use ball gags.

The hankies, they come in red, white or blue, but I think we should stick with red. And the ball gags – ya know what they are, right? 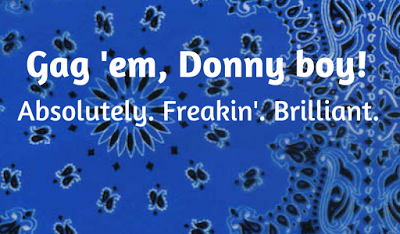 Say, uh, maybe we should stop right there. You queasy ’bout kinky bedroom stuff? No? Well… OK, then.

You’ll see ’em in movies with torture scenes, sometimes. They’re ping pong or tennis sized balls that get put in people’s mouths. You know, to keep ’em quiet. The balls are attached to cords that go around the back of their heads so they don’t pop out.

Never seen one in real life myself, but they’re out there. Heard that from the #RedHatter, too. An’ lotsa other people. Important people. Smart people.

There’s a buncha websites that sell ’em pretty cheap. So I hear. I never looked, myself, ya understand.

You can even go on that YouTube for step-by-step instructions to make ’em yerself. All you need are ping pong balls for small-mouthed feds and tennis balls for big-mouthed feds. (Personally, I don’t see much use for the ping-pong balls; all feds have big mouths, way I see it.) You can use the same kinds of cords for either.

Huh? No, heard that from a different fella.

Yeah, he was wearin’ a red hat, too. What’s that got to do with anything this side of the Rio?

Anyway, back to bidness… 2.1 million federal workers to gag. At least.

That’s a crap-ton a ping pong balls, tennis balls, cords and hankies, right? And someone’s gonna need to make ’em all. Wham-bam-thank-you-ma’am, we got ourselves a crap-ton of jobs! Great jobs, too. Best jobs created in decades! Created ever!

Not true. Fact is, that kinda stuff usually come from overseas or those people to the south. But Prezdint Trump’s got that figured, too – build a wall an’ tariff the heck outta all of ’em. Keep those jobs at home, dammit!

An’ it’s gitten better ever’ day.

I hear the Don’s got a plan to hire regular folks to chase down those nasty federal workers – you know, the ones with years of experience and knowledge we don’t need – hog tie ’em, fit ’em for gags and hold ’em hostage. The Gag Squad’s gonna be an offshoot of the group that’ll soon be roundin’ up immigrants.

Why? Well, jeez. We don’t want ’em sharin’ information with taxpayers. Duh. Never mind the taxpayers are the ones paid for it.

Don’t want ’em sayin’ anything based on their version of facts, especially the science-y stuff. The new Department of Untested Malarkey & Balderdash (DUMB) isn’t quite up and runnin’ yet. Not sure on the name, but no matter. Once that’s goin’ full bore, we’ll be disprovin’ all the baloney those lyin’ elites spew with real facts.

To get DUMB off the ground, first we gotta get ridda all the gagged agencies and employees. That’s well under way with new federal department heads takin’ apart agencies they been picked to lead. I’ll say it again – Freakin’! Brilliant!

Once that’s done, them jobs can be used for more regular folks to create DUMB social media, DUMB blog posts, DUMB press releases, DUMB public advisories and the like.

There’s been a few flies in the ointment, a-course. Take them idiots who started Twitter accounts like @BadHombreLandsNPS, @AltNATParkService and @RogueNASA. Fourteen accounts, pages or sites so far, I hear. They need to be rounded up an’ gagged, too. Never fear; they will be.

Where the heck’s Koresh an’ McVeigh when ya need ’em. Right?

Worried about big gov-ment staying big or getting bigger? Don’t be. DUMB won’t have as many employees as will be gone from the gagged agencies. Even when you add in the Gag Squad jobs, there still won’t be as many people sucklin’ on the government… well, you know. Take that to the bank. So I hear, from lotsa people. Great people. Smartest people in gov-ment. Ever.

Not only is ol’ Don Trump creating jobs, he’s cuttin’ gov-ment down, too. In more ways than one.

Plus, no way Trump’s gonna stop at three or four piddlin’ agencies. If ya wanna be great, ya gotta go all the way. Won’t be long before we need even more gags, which means more ping pong balls, tennis balls, cords an’ hankies. Red ones.

An’ even more jobs! Damn right!

The Prezdint was right all ’long. WINNIN’!

No. I ain’t gonna answer no more questions from the likes a you.