I think Frost was right. “Something there is that doesn’t love a wall.” Even so…. 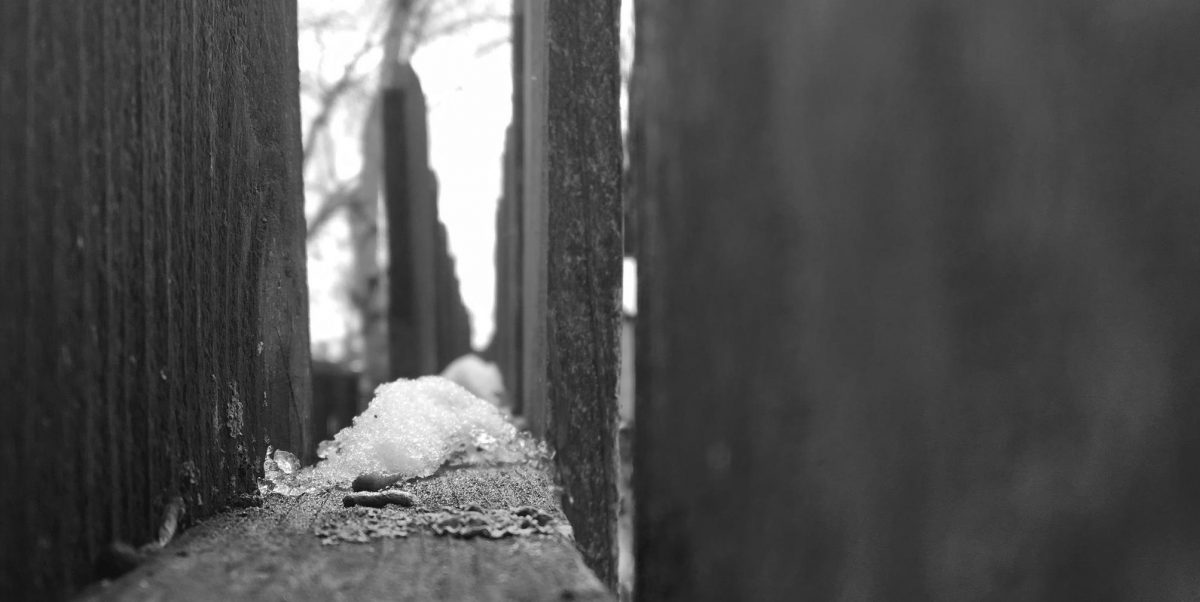 His name is Dennis.

Five years of living 60 or 70 yards away, just over the backyard fence, I really should’ve known that already.

I stood on his front step, shaking his hand and explaining that the posts that should’ve been holding up a couple of sections of our shared fence had rotted out. He’d noticed it, too.

Yeah, we should replace them.

Neither of us knew which of the previous owners of our homes had built the fence in the first place. We agreed to split the costs and do the labor ourselves.

Five years and we’d never even waved at each other. Two little white dogs send my three little black, brown, grey and white ones into a frenzy whenever they’re on the other side of the fence. That’s all I knew.

And on a day we meet to walk the line /
And set the wall between us once again.

We meet out back on the agreed-upon day, each on his own side, shake over the fence’s slats and start the work.

I take out the screws since they’re all on my side. Must mean the fence – and the fixing – belong to me. No matter, he says, we both need to keep our dogs on our own sides. We carry three sections, one of us on each end, and lean them against another length that runs along my property. Then we start digging around the old footings.

Dennis has replaced posts before. We can leave three sides of the old footings in, slide the new 4x4s right in and seal them with Quikrete® on the fourth side. Less work and easier to make them plumb, he says. Smart, I say back.

How long have you lived here? Since ’91. Wow, you’ve seen a lot of neighbors come through, I say, motioning at my house. Yep. He leans on his shovel and makes a sweeping motion. Everyone’s been in these other houses for a long time.

So it goes. Dig, talk, ram the bar into the rotted wood, scrape, dig… and I start thinking about an old story.

We wear our fingers rough with handling them /
Oh, just another kind of out-door game / One on a side.

We marvel at each other’s tools. Who else would have a 15-lb. tamper on hand? No kidding, I say, holding the tool that was once my Dad’s.

Turns out we both inherited our tools from our fathers. The cross-cut saws are almost identical. Both fathers marked them with their names; the ink’s faded on mine and the tape is tattered on his, but they’re still there.

Good tools, we agree. Good fathers, too. They didn’t just leave us tools; they taught us the right way to use them.

This is kind of fun, Dennis says, out here working with my father’s tools. For me, too.

Holes dug, rotted wood carved out, new posts in. Time to mix Quikrete in the holes.

I’d work with you any day, I say. He laughs.

…and we talk some more.

Both self-employed. He’s an accountant, offices down by the Dairy Queen. Mine is right there, I say, pointing at a window.

He’s writing a book. It’s about the travails of caring for his elderly mother, the love-torment-respect relationship and the frustration with siblings who aren’t there when they ought to be. Funny, I say, I went through that not long ago, myself. Not so funny, maybe. He nods.

I’d purchased two 4×4 posts and a couple of bags of Quikrete, probably about eight bags short. He ran to the hardware store to get more.

We resume, and our stories continue to mix together as we pour, water, tamp…

Done. Tools to our respective sheds.

No current events, no politics. We discuss kids, the challenges and joys of raising them.

He has one, a chef now, down in New Orleans. Yeah, we get down there about once a year. No, not to Mardi Gras yet. Maybe next year. Three for me. Oldest is learning to drive. His eyes twinkle below raised eyebrows. I remember that, he says.

Bottles empty. Another shake. See you in a coupla days. Sounds good.

Something there is that doesn’t love a wall /
That wants it down.

We meet three days later, after the Quikrete has set, to hang the fence sections on the new posts. Quick work, that, with electric drills turned screwdrivers. Our fathers didn’t have those. Nope, sure didn’t.

The fence is good again. But is it?

Wanna compare receipts or call it square? I ask over the fence. Square, he says. We shake hands over the slats. Don’t be a stranger.

Five years and two rotted-out fence posts it took to meet Dennis. Good guy. Gonna make sure it’s not another five and two before we sit down for another cold one.

And I think, Frost was right. Something there is that doesn’t love a wall. Even so….

Something there is that doesn’t love a wall,
That sends the frozen-ground-swell under it,
And spills the upper boulders in the sun;
And makes gaps even two can pass abreast.
The work of hunters is another thing:
I have come after them and made repair
Where they have left not one stone on a stone,
But they would have the rabbit out of hiding,
To please the yelping dogs.  The gaps I mean,
No one has seen them made or heard them made,
But at spring mending-time we find them there.
I let my neighbor know beyond the hill;
And on a day we meet to walk the line
And set the wall between us once again.
We keep the wall between us as we go.
To each the boulders that have fallen to each.
And some are loaves and some so nearly balls
We have to use a spell to make them balance:
‘Stay where you are until our backs are turned!’
We wear our fingers rough with handling them.
Oh, just another kind of outdoor game,
One on a side.  It comes to little more:
There where it is we do not need the wall:
He is all pine and I am apple orchard.
My apple trees will never get across
And eat the cones under his pines, I tell him.
He only says, ‘Good fences make good neighbors.’
Spring is the mischief in me, and I wonder
If I could put a notion in his head:
‘Why do they make good neighbors?  Isn’t it
Where there are cows?  But here there are no cows.
Before I built a wall I’d ask to know
What I was walling in or walling out,
And to whom I was like to give offense.
Something there is that doesn’t love a wall,
That wants it down.’  I could say ‘Elves’ to him,
But it’s not elves exactly, and I’d rather
He said it for himself.  I see him there
Bringing a stone grasped firmly by the top
In each hand, like an old-stone savage armed.
He moves in darkness as it seems to me,
Not of woods only and the shade of trees.
He will not go behind his father’s saying,
And he likes having thought of it so well
He says again, ‘Good fences make good neighbors.’