The Innocence We Enjoyed is a Fairy Tale to Our Children

“Why do we have to live this way?”

The evening before, a Thursday, one of our older kids received a snap from a friend who rides the bus that takes all three of our children to and from school. It said a middle schooler next to her had just muttered, “I’m going to shoot up that school tomorrow,” apparently referring to our 11-year-old’s school.

Her hands were behind her head, chin titled down, elbows pulled in to cover her face, body pulled in upon itself. It was as close to a fetal position a person could be in without lying down. She looked up at my wife and me, her face in an expression of fear, eyes imploring.

We had no reasonable or reassuring answers.

“Why do I have to think about this?” she asked, desperation in her voice.

It was Friday morning. She was afraid to go to school. We were afraid to send her.

A bad movie line and urban phrase kept running through my mind as I looked helplessly my daughter:

This shit just got real.

There was a real threat of gun violence in a school where my kid is a student. That brought the gun violence epidemic very close to home.

Worse, it did not surprise me.

It could happen in Fargo, N.D. or our sister city, Moorhead, Minn.

Suddenly, the need for reasonable gun control was no longer a theoretical argued over social media. I was staring it right in the face, and it was the face of my baby.

We had called the Fargo police right away the evening before. They alerted school officials, including the superintendent and principals. They interviewed the girl who sent the snap. They watched security footage from the bus to identify the person who made the threat. They interviewed that person. They interviewed several others. The Fargo Police Department resource officer at my daughter’s school was prepared for anything.

The following Monday I learned authorities had determined there was no longer a threat, or that the threat wasn’t serious to begin with. That wasn’t made clear to me.

We know one thing for certain, and my wife’s registered nurse training reinforces it – when someone makes a threat to take life, whether it’s their own or someone else’s, there’s danger. You take it very seriously. You act.

As I write this post, the headlines are screaming about yet another mass shooting in the USA, this one in a California bar. At least 12 more people are dead. Eleven died in a mass shooting in a Pittsburgh synagogue a mere 12 days ago.

“Yet another.” The phrase is starting to show up often in headlines about mass shootings. With so many over the past several years, it has to be there.

Yet again. But why?

Part of the answer is there are simply too many guns in this country, and too many of them are too accessible.

According to The Washington Post, “There are more than 393 million civilian-owned firearms in the United States, or enough for every man, woman and child to own one and still have 67 million guns left over.”

A study released by the Graduate Institute of International and Development Studies in Geneva found that “US citizens own 40% of all guns in world – more than next 25 top-ranked countries combined.”

And those are just the ones we know about.

Even so, there’s zero chance of passage of any reasonable gun control in North Dakota, not with a Republican governor and Republican supermajority in our legislature.

Nationally, even when we had a democratic senator she voted against reasonable gun control or in favor of loosening restrictions every time. Not a surprise, really; Sen. Heidi Heitkamp was one of only four Democrats in the Senate with an “A” grade from the National Rifle Association. 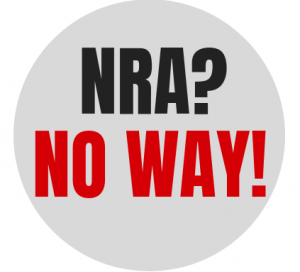 Come January, North Dakotans will be represented by three Republicans in Congress. The NRA “A” grades will be even stronger.

There is a glimmer of hope for the nation as a whole, however. Yesterday, Everytown for Gun Safety celebrated several victories by gun violence prevention candidates in the midterm elections the day before.

“With the victories of Jason Crow in Colorado, Sharice Davids in Kansas, and Jennifer Wexton in Virginia, we flipped some critical seats to the side of gun violence prevention in the House of Representatives, opening a new world of possibilities for life-saving gun laws,” said an email to supporters. “Next, Governors-elect Laura Kelly in Kansas, Tim Walz in Minnesota, Gretchen Whitmer in Michigan, and Jared Polis in Colorado ran on a gun safety platform and will stand with us in the fight to end gun violence.”

The shit just keeps getting more real for more Americans. The shooting in California in today’s early hours is yet another reminder.

I can only hope groups like Everytown and Sandy Hook Promise continue gaining ground. I can only hope people get real about taddressing the constant threat. And I can only hope it never gets as real as blood on the floors of a Fargo-Moorhead school, bar, place of worship or a thousand other gathering places in our community.

Together we can do more than hope. We can insist our representatives introduce or support reasonable – and absolutely necessary – anti-gun-violence laws.

My 11-year-old is innocent. Not only do we need an answer her questions, we need to make sure she never has reason to ask them in the first place.