Brad Kingery, a CCL volunteer from Bemidji, Minn., agreed. “People are just looking for a way to join the conversation,” he said. “We all just need to keep our minds open. We feel we have a great solution; we just have to share it with people.”

The solution, which has been kicked around for years, became much more concrete on November 28, when five members of the U.S. House of Representatives – three Democrats and two Republicans – introduced H.R. 7173, the Energy Innovation and Carbon Dividend Act.

According to CCL, if the act becomes law it will create more than 2 million new jobs, lower health-care costs, promote energy innovation and encourage consumer spending. More importantly, it will reduce emissions of carbon dioxide and other greenhouse gas “…by at least 40 percent in the first 12 years.”

“It does so by applying a nationwide price on carbon emissions and returning the revenue to people each month,” said a CCL press release. “This approach is a climate change solution long advocated by both economists and climate scientists as the simplest, most effective approach to solving climate change.”

It’s unlikely there will be any action on H.R. 7173 during the lame-duck session of Congress currently underway. However, the sponsors plan to reintroduce the bill in the next Congress.

In the meantime, the bill provided something positive and concrete to discuss with North Dakotans.

“Citizens’ Climate Lobby is very solution-focused,” said Linda Kingery of Bemidji. “The organization and the way we do things are very connected to the value of optimism.”

A CCL handout outlined how the Energy Innovation and Carbon Dividend Act will limit carbon pollution by the United States: 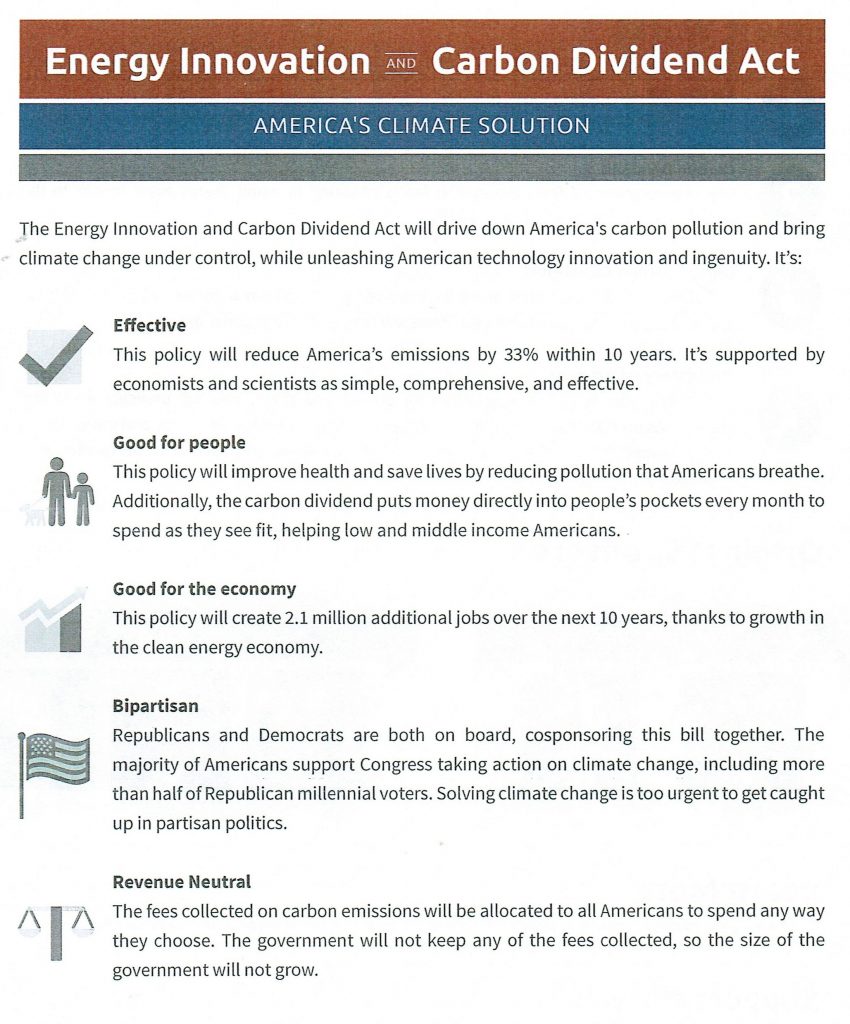 Thompson said open discussions between people and legislative representatives with differing opinions and points of view will help change the “culture of dismantling” in Washington, D.C., where one presidential administration or controlling political party tears down what its predecessor accomplished. And that, he said, is the only way to drive lasting change.