Five years after Casselton’s near miss with exploding oil cars, the North Dakota Industrial Commission is loosening rules for testing Bakken crude set to ship by rail. What do YOU think? 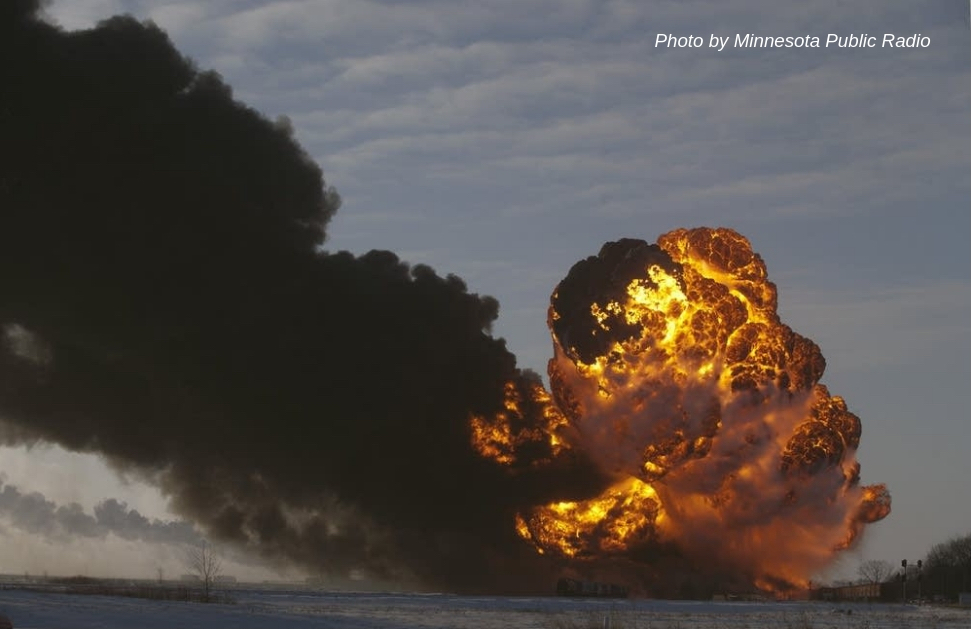 The irony is so thick it cuts like Jack the Ripper’s blade through London fog.

But this ain’t London, folks.

It’s our own backyards.

Too Close to “An Ink Spot”

Rory Peterson, who runs the Hardware Hank in Casselton, was spot on when he commented recently to The Forum News Service about the explosions five years ago.

This is not mere hyperbole.

Train cars carrying Bakken crude have exploded in or near multiple cities in the United States and Canada. Stories and reports about them speak of human beings being nearly vaporized by the intense heat. The blasts have incinerated homes and businesses, cost billions and contaminated our land and water resources.

This is a big problem. 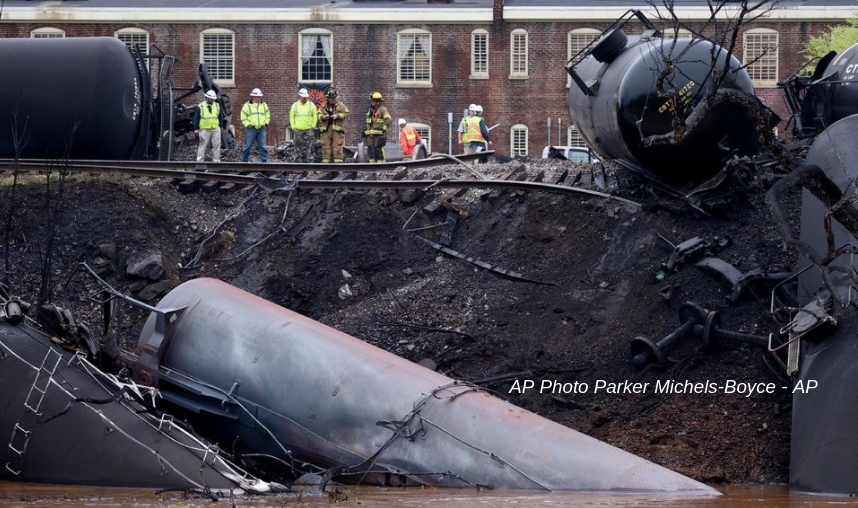 The problem is flowing right past homes, schools and businesses in Dickinson, Harvey and Fargo; Alexandria, Brainerd and Duluth; and Glendive, Great Falls and Miles City. It’s clickety-clacking up and down rail lines through Iowa, Minnesota, Montana and North Dakota, all the way to the east and west coasts.

Fatefully, the problem has exploded in communities across North America, like:

Casselton, where no one was injured but around 400,000 gallons of crude dumped onto the surrounding land and forced about half the town’s residents to evacuate.

Lac-Mégantic, Quebec, where explosions of rail cars carrying Bakken crude oil killed 47 people, incinerated 40 buildings and gutted most of the community’s downtown. “Most victims had to be identified from DNA samples and dental records,” the BBC reported.

Lynchberg, Va., where about 30,000 gallons of fiery oil dumped into the James River and caused the evacuation of several hundred residents.

There are many more.

Two parts of the Bakken crude oil transportation problem are the volatility of natural gas liquids (NGLs) and the pressure they’re under when transported in rail cars. NGLs include ethane, butane, propane and isobutane.

All those “-anes” are “pains in the a’s” of the oil and gas industry.

Since 2015, companies have been required to “remove the most volatile gasses from Bakken crude oil to ensure that the vapor pressure doesn’t exceed 13.7 pounds per square inch,” according to the Bismarck Tribune. They’ve also been required to conduct the tests every quarter.

But the industry and its state government ally, Director of Mineral Resources Lynn Helms, say there’s no need to test that often. After 60,000 tests, Helms told members of the Industrial Commission, “…about one in 1,000 have exceeded the 13.7 psi limit.”

“Well, gee, guys, this is costing our oil and gas buddies way too much money, and it’s wasting government time and money, too. Why don’t we go ahead and reduce the number of times we have to check the stuff, move on down the line and make more money for all of us? Hmmmm?”

The fallback position for the oil-gas cheerleaders is in the U.S. Department of Transportation’s rules, which consider pressure under 14.7 psi for crude oil in rail cars to be “stable.”

Tell that to the families of the 47 people who died in the Bakken crude inferno in Lac-Mégantic. I doubt they’d be satisfied with pressure tests that show “only” one in 1,000 tests comes in higher than the 13.7 psi limit.

Are you comfortable with that?

Do you care if oil companies making gazillions of dollars from what they’re pulling out of North Dakota have to test the Bakken crude oil that they want to send past your home, your kid’s school, your business more often?

Finally, do you think it’s worth the extra cost for those companies, and some extra to government, to ensure every one of those rail cars carrying Bakken crude is truly stable?

Bottom Line on the Rail Line

I don’t care how much it costs the oil and gas billionaires, or if it takes a little extra time and expense for the state. It’s the government’s role, part of its “protect and provide for public safety” responsibility.

Requiring that Bakken crude set for rail transport be tested four times a year should be the MINIMUM.

I’d take several more steps beyond that – like requiring stabilization of Bakken crude oil rather than mere conditioning – but for now I’d settle for not taking this step back.

The Industrial Commission met on December 7, but according to a spokesperson, it “… has not taken any action since the November 13 Bismarck Tribune article on oil conditioning. The record was left open following the hearing for the filing of additional information. It is anticipated that the Commission will take action on the information from the public hearing in early 2019.”

Perhaps by then the irony will sink in, like Bakken crude contaminating soil after another train derailment and explosion.

A Parting Shot at Bakken Crude

Bakken crude is one of the dirtiest energy sources on earth, close on the heels of lignite coal. Given that, here’s another alternative that would eliminate the need to talk about the dangers it presents ever again –

If the potential for an explosion of Bakken crude running through or near your town is a tad concerning, drop the Industrial Commission a line at ndicinfo@nd.gov or call 701-328-3722. Let your state legislators know, too – www.legis.nd.gov.

While you’re at it, check out The Coalition for Bakken Crude Oil Stabilization for more information and discussion.