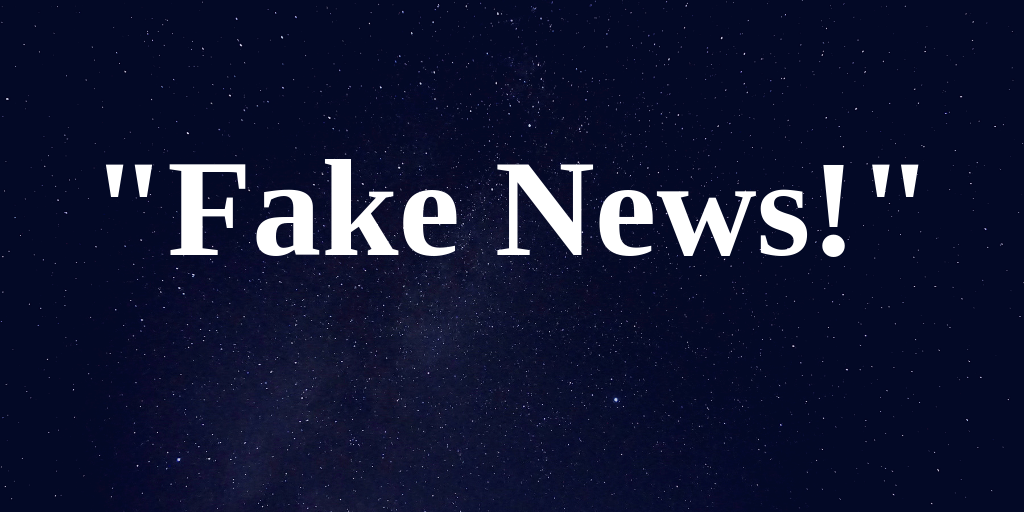 The post ran a few days ago, and so far 188 people have engaged with it in some way or another. It’s been shared 49 times, and there are 94 comments, including several from Trump supporters who followed Pat Pierce’s lead in proclaiming IV Words a “fake news outlet.”

Mr. Pierce went further, as you can see – 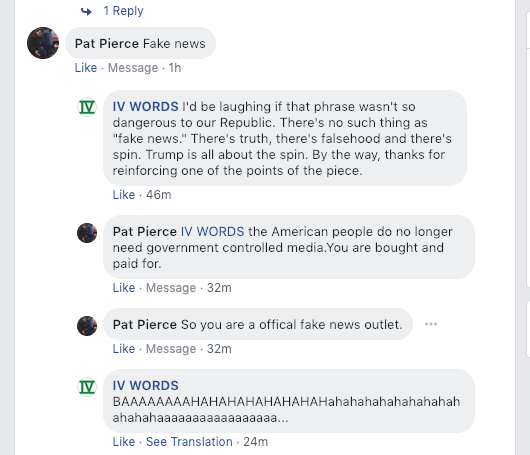 You can check out the whole string here. As you can also see, several other MAGAts picked up the refrain.

I couldn’t be prouder.

It’s true, The Cheeto hasn’t blocked my replies to his tweetstorms yet, but this is a big step forward. Right?

Fake news! Who’d’a thunk it even just a few short months ago?

I’m honored. I mean, seriously, I can’t say enough about Pierce and his cohorts. They’ve catapulted me into an entirely new realm of liberal blogging, and my appreciation overfloweth, as the Evangelicals might say.

Not only am I fake news but, according to one reader, I’m blogging from my mother’s basement. Sure, Mom passed on several years ago, but, hey! That puts a little cherry on top of the “Fake News!” label I’ve been pursuing for so long.

As you can also see, Pierce wanted nothing to do with my explanation that there’s no such thing as “fake news”; there’s only truth, falsehood and spin, and President Donald Trump is all about the spin. In fairness, I forgot one category, which might have confused him:  Lies. Which, in my book are a bit more aggressive and intentional than plain old falsehoods.

That’s where Trump truly excels. More than any other president in human history. Perhaps any other politician. Maybe even any other human. Bigly.

Seriously, though, if I’m now labeled “fake news,” I’m doing something right. From my “libtard” viewpoint, “fake news” is simply news that MAGAters don’t like or agree with.

And if that’s IV Words, I’m perfectly A-O.K. with that.

This blog is none of those things, anyway. It’s opinion based on facts. I didn’t bother to go into fact vs. opinion with Mr. Pierce or any of the other MAGAts. That would have brought the entire discussion to a screeching halt due to utter confusion, bewilderment, befuddlement. Or made them go off on even more in their #RedHatter rage. One can never be too sure.

Thank you, one and all, for reading, whether you hit me with a Like, Laughing face, a Heart or a Frowny face, whether you commented positively or negatively, and especially if you shared.