Essentially, this means I’m more Introverted (I) than extroverted; more Intuitive (N) than observing; more Thinking (T) than feeling; more perceiving (P) than judging and more assertive (A) than turbulent. My overarching role is Analyst, which also includes Architects, Commanders and Debaters, and my strategy for life is either constant improvement or confident individualism. (I took the test twice, just to be sure.)

I can agree and live with all of that, but what’s the point?

Not My First Rodeo

The first I took a Myers-Briggs-like test I was in my mid-20s (I’m 50 now). I was being considered for a copywriting job, and as one of the last steps in the potential employer’s hiring process was a personality-type test.

The analysis said things like I was highly driven; that it took me a long time to make decisions because I weighed every possible option before committing to a specific solution, but also that once I committed, I was all in; that I preferred my own company but could be sociable if situations demanded it; that I abhorred chit-chat (no office gossip); that I would think deeply about challenges and problems; and that I would drive myself mercilessly to achieve perfection.

Wow. Those were all right on, when I thought about it.

Suddenly, here was a description of myself that truly struck a chord, telling me not only that the traits I thought I had were truly there, but also that it was OK. I feared some of the traits of my personality type, like preferring to be alone or with just one person rather than dozens at a party. I understood, finally, that there was nothing wrong with me, with being INTP, and that there were others – not many, but some – just like me.

I’ve taken more of these tests over the years. Some of the traits have strengthened or weakened, but all in all the tests always seem to re-state or validate most of what I learned about myself from the first one.

We Are What We Are

We are who we are, and that’s a good thing.

I’m an Analyst and a Logician. And that means…

“Analysts… embrace rationality, excelling in intellectual and technological pursuits. The Thinking trait makes Analysts exacting, and the Intuitive trait lets them apply their minds to almost anything, with their imaginations aiding calculated, strategic thinking, or seeing just how far the rabbit hole goes with a crazy scheme or thought experiment.”

“INTPs are known for their… unrelenting logic – in fact, they are considered the most logically precise of all the personality types.”

“Constant Improvers are sensitive and contemplative individuals who enjoy having their own space and freedom. They are often deep and creative individuals, though often tense and more comfortable on their own than mixed up in the judgment of the real world.”

“… unlikely to understand emotional complaints at all, and their friends won’t find a bedrock of emotional support in them.” 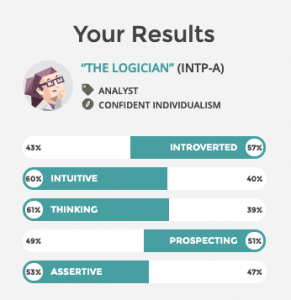 I didn’t take that job, by the way.

In true INTP fashion, I hemmed and hawed, thought and overthought every possible pro and con and delayed making a decision. When I finally made the decision, I felt good about it and had no problem following through.

But I still have the results of that first test. I dig the analysis out from time to time and read it again. I love reliving the “A-HA” moments, only this time with a quarter century of practical experience underpinning their validity.

Which is probably why I keep taking these tests when I stumble across them.

It’s really great when others take the test, too, and share their results. You figuratively slap yourself in the forehead and think, “Of course! That’s why they (whatever it is they do or say). That totally makes sense!”

And That’s the Point, Really

What’s important is not necessarily discovering what traits we have, but what they mean for our interactions with others.

From where I’m sitting, the world could use a little more of any of those kinds of outcomes right about now.

So. What’s Your Initialism?

Turns out I have some pretty cool INTP peers, starting with Albert Einstein <supreme bragging rights>. Ellen Page, who I’ve always had a bit of a crush on, is one, too, as is Bill Gates.

You should take the test, too.

Find out what your personality type is, if for no other reason than just the fun of contemplating what it says about yourself. What it validates. What it means.

Thinking about it is one of the very best reasons for doing anything.

Cool StuffIntroversionThe Way It Is