More Kudos to the Kids

Tomorrow is a big day for the planet.

The kids are stepping out and speaking out once again. They’re demanding action on global warming and climate change. They’re sick and tired of waiting around for my generation and the one before it to do all the things that should’ve long since been done.

Before today, they’ve filed a lawsuit against the government of the United State of America. They’ve walked out of school to protest inaction by governments around the world. And tomorrow, March 15, they’re walking out again, but in a more organized fashion.

This time it’s being billed by some as a “coming out party” for the international Youth Climate Strike, a movement that started with a 15-year-old girl who’s had enough.

I’ve written about the lawsuit before, giving the kids behind it a shout-out. Today, once again, I say…

Kudos to the Kids!

The youth of the United States and the world have been gathering steam for several years now, beginning even before 21 of them filed suit against the U.S. government for not acting on what it knew about global warming and its effects.

At first, government lawyers laughed it off.

Since then, the U.S. Supreme Court has dismissed two government motions to delay or dismiss the case.

The suit, known as Juliana vs. United States, doesn’t mince words. The introduction begins this way –

“For over fifty years, the United States of America has known that carbon dioxide (“CO2”) pollution from burning fossil fuels was causing global warming and dangerous climate change, and that continuing to burn fossil fuels would destabilize the climate system on which present and future generations of our nation depend for their wellbeing and survival.”

On March 3, “60 Minutes” featured the lawsuit and the plaintiffs. It’s worth watching.

Bottom line: These kids are serious, and as their lawsuit continues to move through the courts and numerous complex legal wranglings, they continue to pick up supporters.

They aren’t going away. 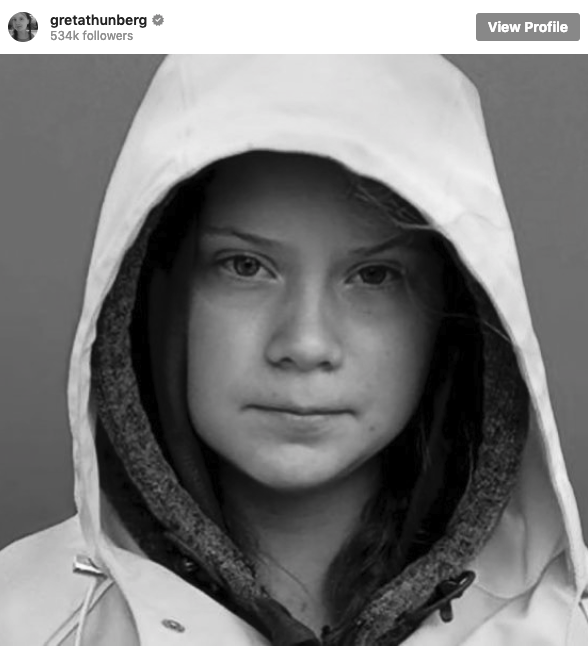 Then there’s Greta Thunberg. If you haven’t heard of her yet, here she is. You probably have, though; she’s gone viral.

Thunberg is a 16-year-old Swedish climate activist who has been skipping school every Friday for months, going instead to sit in front of the Swedish parliament building to protest her government’s lack of action on climate change.

She also spoke to global leaders at the World Economic Forum, and in January at the COP24 United Nations Climate Change Conference, while the Trump administration was trying to sell the world on “clean coal,” Thunberg “…delivered a damning speech… telling climate negotiators they weren’t ‘mature enough to tell it like it is.’”

Today came the announcement that she’s been nominated for the Nobel Peace Prize for her work.

Way to go, Greta! You deserve to win!

In February, thousands of students around the world emulated Thunberg by walking out of school to protest climate change inaction. And the movement continues to pick up strength.

Tomorrow students from around the world will kick it up another notch by once again walking out of school in solidarity with Thunberg to protest inaction, or adverse actions, by their governments regarding global warming and climate change.

To see for yourself, check out these hashtags:

Many of them will be in the United States, including members of what’s called the “Youth Climate Strike.”

Once again, the kids are taking the lead. (@YouthvGov)

Here’s the group’s mission, as stated on its website:

This clear, concise statement captures the problem perfectly. Now, if only the rest of us would listen. And take action.

Here are the demands of the Youth Climate Strike:

The group lists solutions, too. It’s definitely not all words. Excellent.

It’s painful to think that my generation, with all the information it’s had about global warming and its dangerous effects, has done so little to address the problem. In fact, my generation has exacerbated the problem.

The generation before mine wasn’t much better, but the Baby Boomers didn’t have the information we’ve had.

Fact is, we’re all culpable.

They’ve been waiting, watching, listening… and getting frustrated. All they want is a healthy planet that will sustain their lives and the lives of their children, clean air to breathe, enough food to eat… You know, all that “radical” “socialistic” stuff climate deniers keep crowing about.

It’s sad that a bunch of kids have to take the so-called “adults” by the hands and show us the way, but this middle-aged activist is thankful we have them.

In some ways, calling them the “new leaders on climate change,” as I’ve done in my headline, is bestowing a dubious honor given what little leadership there’s been on climate change up to this point. That’s relatively speaking – James Hanson, Al Gore and other climate leaders have been amazing, but it’s been too few trying to educate too many for too long.

Dubious honor or not, the youth have taken up the mantle. Keep your eye on them, all of them. They’re doing great things. They’ll accomplish great things. Perhaps starting with opening the floodgates to a new watershed moment in the climate crisis response.

Way to go, kids. Keep leading the way and creating even bigger days for the planet. I’m right behind you.