Good fortune comes in all shapes and sizes, and sometimes travels in a little Mazda pickup. Where it’s headed after a few months is anyone’s guess. 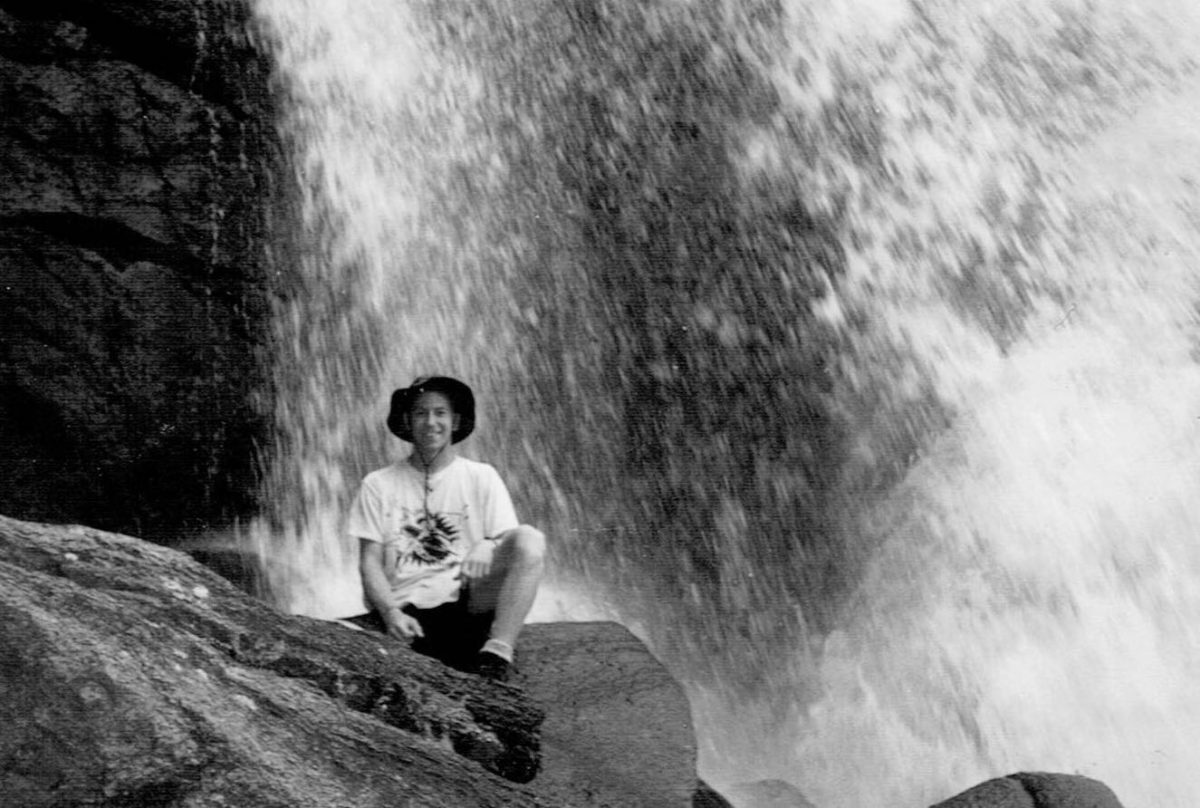 The Border Brothers & One of the Best Stories Ever

The other redhead leaned in to look closely at what I held gingerly between my thumb and forefinger.

“I been lookin’ for one of those my whole life!” he exclaimed.

“No, I’m serious!” he said, actually getting upset now. “My whole fuckin’ life.”

He paused, took another good look, then started counting with his forefinger. “One…two…three…four. Ah, man!” He took a step back.

“An’ you’re seriously tellin’ me you’ve never even looked for one before?”

“Never,” I assured him. His face was boiling.

“Beginner’s luck?” I said sheepishly, shrugging my shoulders. “I am part Irish.”

“Fuckin’ A!” he exclaimed. Then, “Well…” –slapped me on the back – “my whole goddamned life … I guess…. Guess I’ll just hafta keep lookin’.” He backed up, bent down and started looking through the patch of clover again.

It was the summer of 1989, and like most of the Aspen Lodge’s other summer employees, I was a college student. Between my junior and senior years. There were more than a dozen of us from all over the country, from state schools like North Dakota State University, Ivy League institutions like Brown and every type of college in between.

I’d pulled an all-nighter a few weeks earlier, driving down from Jamestown, N.D. with two buddies, Shannon and Todd, to the Aspen Lodge, a summer vacation spot about 25 minutes up into the Rockies from Estes Park. They had both worked at the lodge the summer before.

Aspen Lodge is situated at the base of Twin Sisters, a mountain with two nearly identical peaks across a valley from its better-known brother, Longs Peak. In fact, the view of the 14,259-foot Longs from the top of one of the Twins is breathtaking.

Where the Beer Ran Out

We hadn’t been there for too many days when, one evening, a couple of guys walked up and told us they’d just been hired on.

They didn’t look much alike, but, hey, if that’s what they say…

“No, we aren’t in college.” Jason almost scoffed at the very idea. “We’re from LOOOZ-ee-anna.” (If you’re gonna say it, say it right, he told me many times that summer.) “Well, actually, there and Florida. We only met a few months back.”

They took turns telling the story.

Jason had grown up in Louisiana, Tony right across the border on the Florida panhandle. They were 19 and 20 years old, respectively. Jason was the talker, Tony was the quiet one, but neither talked too much. Grew up their whole lives within a short drive of one another, but neither had known the other even existed.

Not long before we met them, Jason’s mother told him for the first time that he had a brother. Not only that, but Tony lived a mere hour or so down the road. Jason tracked his newly found brother down, and they’d barely been apart since. Even started a business together.

A couple of weeks earlier they’d decided to hit the road. One of them had a little brown Mazda pickup with a topper on the back, so they packed it up, lit out and didn’t turn back.

So how’d you wind up here?

“Well, we got to Denver yesterday –” Tony began.

“Yeah.” Jason jumped in. “We only had enough money left for some gas and a case of beer. We wanted to see the mountains, so we came up this way.”

Both the gas and the beer had about given out not far from where they stood, he said.

“We stopped here, an’ they gave us jobs! Got lucky, I guess.”

Jason and I became pretty good friends. Made sense. With our red hair, we could have been mistaken for brothers before anyone pegged Tony as his sibling.

We hiked up to Ouzel Falls together a few times over the course of the summer, hung out, debated which rock album was the best of all time (Pink Floyd “The Wall” vs. the Allman Brothers Band “At Fillmore East”), rehashed separate climbs up Longs Peak, drove to Boulder whenever we could, and laughed about the cook who looked just like David Crosby, who said he hated his job but stayed because it was the only place where the bosses would let him drink while he worked.*

Then there was the middle of the full-moon night when we decided to summit our Twin.

I think it was Jason’s idea, and I’d been partying enough to think it just had to be done. We set off at around 1:30 a.m., the two of us and Wendy, one of our co-workers.

“But… we came to see the full moon from the top,” I said.

“Yeah,” he agreed, “but we can see it just fine from here.” Wendy nodded in agreement.

Which is how I wound up on the very tip top of one of the Twin Sisters, all by myself at around 3:15 in the middle of a full-moonlit night, taking in the expanse of the Rocky Mountain range.

It looked like the bumps of a bunch of kids under the covers of a super king-sized bed, a cool silvery blue comforter settled over them. Absolutely quiet. And the stars! Man.

It’s hard to describe what it was like, that 15 minutes or so sitting cross-legged on the granite peak, sometimes lying on my back, taking in what seemed like all of creation.

I was blown away, yet absolutely calm.

I felt huge. I felt tiny.

I felt absolutely alone, but not at all lonely.

I listened to myself breathe.

I felt completely whole, filled up, but at the same time empty, like I needed to swallow everything within eyeshot in one huge gulp of awesomeness.

If you want one word, it would have to be “free.”

Freer than I’d ever felt before, and few times since.

It remains one of the best moments of my life. Sometimes, when I need to go somewhere safe or comforting in my mind, I go there again.

After enough time, but what seemed not nearly enough to hold on to, I headed back. Jason and his new girlfriend were there, arm in arm. We made our way quietly down the mountain, them holding hands, me following along behind.

Huge smile on my face.

By the time we emerged at the trailhead the sky was just beginning to lighten in the east in the way it only does in a mountain range – absolute blackness near the ground, with the faintest hint of shimmering light reaching toward the stars from behind the mountain profiles.

The summer moved along, as summers do. We worked, sat around fires, told stories, talked about dreams and did everything we could to capture and solidify every minute of it into our memories.

By early August I was ready to head home. Of all things, after all the expansive beauty of the Rockies, I longed to see a prairie sunset.

“Got Lucky, I Guess”

So there we were, Jason and me, a couple hundred yards up from the base of one of the Twin Sisters, taking a smoke break out behind the kitchen of the main lodge where both of us happened to be working that June afternoon.

He started swinging first one foot, then the other, brushing the soles of his boots across the tops of the clovers. Then he bent over and REALLY started looking.

“Lookin’ for a four-leaf clover,” he said, not looking up. “Ever find one?”

“Nah,” I said, bending over to search with him. “Never looked before.”

“I look every chance I get,” he said. “Been lookin’ for one my whole life.”

Not a minute or two later…

“I think I’ve got one,” I said, holding a perfect four-leaf clover up to Jason’s face.

Yeah, he was – as my own teenagers would say now – “triggered” that I’d found a four-leafer my first time out. But it didn’t last.

I put my treasure between two napkins to keep it safe until my shift was over. Later, I slipped it into the pages of one of the dozen or so books I’d brought along for the summer (English major’s hazard).

That mid-August I headed back to North Dakota and left the Rockies, Tony, Jason, Wendy, the woman from Brown and everyone else behind. The Border Brothers weren’t sure if they’d stay on into the fall. If their jobs were still available, maybe, they said. If they didn’t get itchy feet first. There was already had enough gas and beer money to go quite a ways farther west….

Every March, around St. Patrick’s day, I think of Jason and his brother, Tony, and the first four-leaf clover I ever found. Always brings a smile. And I wonder again how one of the craziest stories I’ve ever heard – their story – moved on down the road. How it all turned out. And where the two of them are now.

Right about the time I think that clover means I’ve had the luck o’ the Irish for the past 30 years, I remember an empty space in the line.

See, I’ve found three more four-leaf clovers since then. Each is laminated along with a description of where I found it and the date. I’ve been fastidious about that, for good reason.

Since leaving Colorado, I’ve never seen the first one again. I’m 99 percent sure I tucked it into the middle of “Chesapeake” by James A. Michener before leaving Aspen Lodge all those years ago, but I’ve leafed through that novel dozens of times since then.

So, does that make me unlucky?

Hell, it’s pure luck even to get the chance to hear something like the Where-The-Beer-Ran-Out tale in the first place, let alone get it straight from the brothers’ mouths and get to hang out with them for a few months.

Maybe one day I’ll find that first clover a second time, but if not, it’s all good.

Besides, the only luck I believe in is the kind you make for yourself.

That’s what I tell myself, anyway.

But just you try to pluck one of my other four-leafers out of my hand.

* Alcoholism is nothing to laugh at or joke about. Help is available; if you or someone you know needs it, get it.