Kevin Cramer, one of North Dakota’s U.S. Senators, is sucking down the Trump Kool-Aid so fast and so completely that one has to wonder if he’s being waterboarded with the stuff. Case in point: impeachment. 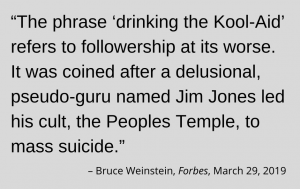 Mind’s eye – Ivanka and Jared, laughing hysterically as they pour the Kool-Aid down Cramer’s smarmy gullet.

I recently contacted Cramer’s office to urge him to vote “guilty” to impeach President Trump at the end of the Senate trial. Cramer’s response was, “…I see no evidence of an impeachable offense.”

No surprise. This is, after all, the guy who promised in his 2018 Senate campaign– repeatedly – that if elected he would vote with Trump 100 percent of the time.

Cramer said, in essence, “I will check my brain at the door.”

Senate cloakrooms had marble jars at their entrances? Learn something new every day.

That’s a dangerous, not to mention irresponsible, promise for someone serving in what was once known as the “most deliberative body in the world” to make. Emphasis on “once.”

Cramer went on to call the impeachment in the House a “nonsensical” crusade, and he promised that if he becomes a juror (which will happen next week), “I will not shirk my responsibility to call out the horrible handling of this process.”

The responsibility to protect our republic? Anyone? Anyone? Cramer?

I actually listened to the House impeachment hearings, read about them in credible newspapers and magazines and watched parts on television. And I, too, read parts of the transcript of the Trump call with Ukrainian President Zelensky.

If Cramer sees “no evidence of an impeachable offense,” I can only conclude it’s because his nose so far up –

Cramer’s letter is simply a GOP-talking-point-memo response from a man who’s less interested in finding the truth or protecting our republic than nitpicking the process and making sure his party retains control of the White House at all costs.

Only one thing about Cramer’s impeachment response remains a mystery –

What flavor is the Kool-Aid?