Trump is already impeached. Now he must be convicted. Cut and paste this letter to send to your senators. Or write your own. Either way, let them know they have a duty to protect our republic by removing the president from office. 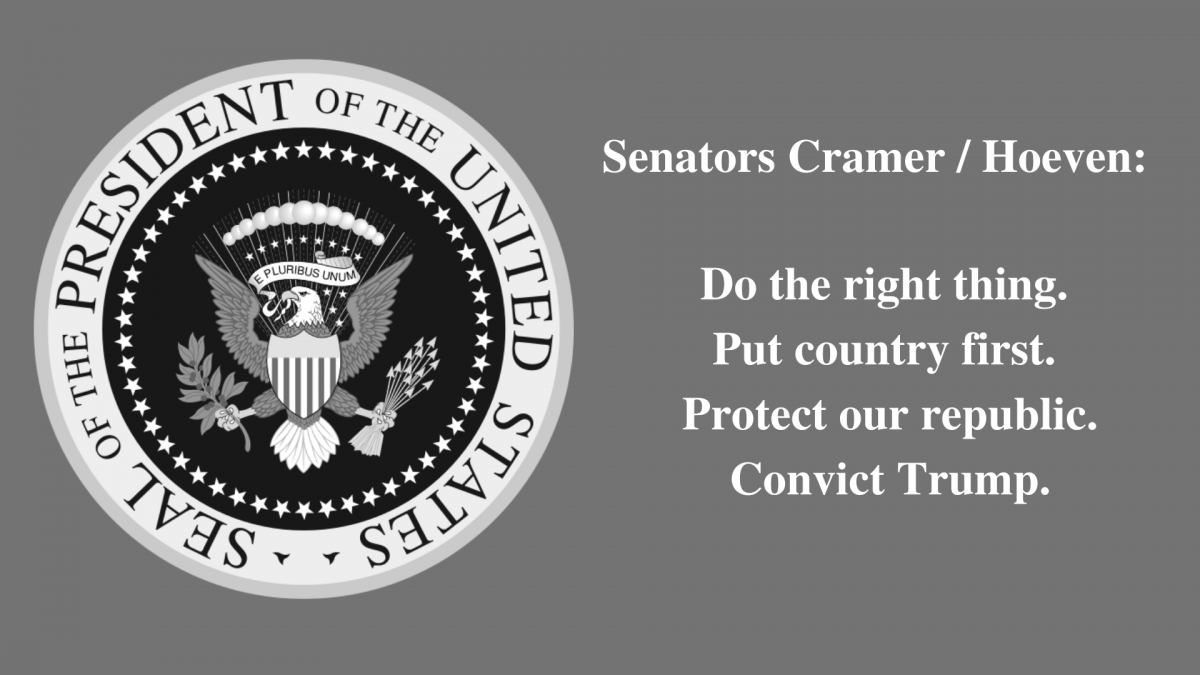 The impeachment case is clear, logical and evidence-based. So convict President Trump.

The case against President Trump being presented in his trial in the Senate is strong. The defense isn’t just weak, it’s based on distortions of the Constitution.

Today I wrote to North Dakota Sen. Kevin Cramer, R-ND, and Sen. John Hoven, R-ND, asking them to vote to convict Trump (see below). Please feel free to cut, paste and edit the letter in any way you see fit, and follow the links at the end of the post to send a letter to your senators. It’ll cost you less than three minutes.

I’ve been listening to the impeachment trial in the U.S. Senate today.

If you have been paying attention, sitting there in the Senate chamber, you must realize the only plausible conclusion you can reach is that President Donald J. Trump is guilty of high crimes and misdemeanors and should be removed from office. There is no other reasonable conclusion.

When the time comes, you must vote to convict Trump.

The case against Trump laid out by Rep. Adam Schiff today is overwhelming. His connection of people, circumstances and actions by Trump and many others is logical and evidence-based. The president used the power of his office in an attempt to coerce another nation to investigate one of his political rivals in the 2020 election. He withheld funds that were already appropriated by Congress to use as leverage to get what he wanted from Ukraine’s president. The Government Accounting Office confirmed that action was against the law. And he stifled anyone in his administration who could undermine his lies to the contrary from testifying before the House.

Based on what I’ve heard today, and previously in the House impeachment hearings, his guilt is clear. It’s obvious. And you risk the future of our republic if you allow Trump to get by with what he’s done.

You claim to love this nation. If that’s true, then you cannot allow the president to undermine the integrity of our elections, use taxpayer funds as leverage against another nation for personal/political gain, lie about it and, finally, force anyone who works for him to withhold evidence. If you truly love this nation, you must vote to convict Trump and remove him from office.

There are times when elected officials like you must set aside party affiliation to do what’s right for the United States of America and its citizens. This is one of those times.

Senator, you have an opportunity to do the right thing. Please do it.