When I was a Congressional staffer back in the early ’90s, I dealt with water wars – small “w” – almost daily.

I worked on agricultural and natural resources issues, so I got an earful of disputes between neighbors and municipalities over water rights, complaints that the U.S. Army Corps of Engineers was “out to get” farmers and ranchers by releasing too much water from dams each spring, and assertions that the Environmental Protection Agency and U.S. Fish and Wildlife Service were hell-bent on stealing landowners’ property through rule-making.

At the time, upstream and downstream states were locked in a big “little w” over how much Missouri River water should be released from Garrison Dam in North Dakota and Oahe Dam in South Dakota. The Dakotas and Montana, in the midst of several years of drought, wanted to keep more water for consumption, irrigation, electric power generation and tourism. Downstream states wanted as much as they could get for all of that plus navigation, i.e., shipping goods on the river.

Even as that water war raged, nagging anger and distrust lingered from long-since “settled” ones, like the 1940s decision to build Garrison Dam. Lake Sakakawea subsequently flooded thousands of acres of Native American lands. The damming was done, but to many Native Americans reparations remain unresolved.

More recently, the Missouri was the focus of another water war that did, in fact, get violent.

Protests that spawned the hashtag were attempts to prevent Energy Transfer Partners (ETP) from laying the Dakota Access Pipeline (DAPL) under the Missouri just north of the Standing Rock Sioux reservation. It was a route which would mean polluted water for the reservation’s occupants if ever there was a leak. And a route selected after rejection of the original design, which would have put the pipeline just north of mostly white Bismarck, N.D. The situation turned nasty.

And – Surprise! – native people lost again; the Trump administration issued the permit ETP needed to move forward. But that was just the first battle; the Standing Rock Sioux and their supporters are still fighting the war.

Without water, we die.

That’s what Egypt’s leaders are thinking right about now, as Ethiopia nears the point of flipping the switch on the Grand Ethiopian Renaissance Dam. The $4 billion structure, which has been under construction for years, is on the Blue Nile, which flows into the Nile, which in turn is the source of 90 percent of Egypt’s fresh water.

Ceding control over its water to another nation isn’t sitting too well with Egyptians.

According to the International Crisis Group, “The Nile basin countries could be drawn into conflict because the stakes are so high: Ethiopia sees the hydroelectric dam as a defining national development project; Sudan covets the cheap electricity and expanded agricultural production that it promises; and Egypt perceives the possible loss of water as an existential threat.”

To quote the BBC, “A new dam on the Nile could trigger a war over water unless Ethiopia can agree to a deal with Egypt….” Now the United States is stepping in, hoping to broker a solution that’s acceptable to impacted nations and removes the potential for violent conflict.

That’s the most visible threat of Water War at the moment. More to come….

Except it kinda does have something to do with us, every American and inhabitant of the planet.

I immediately think about the Northern Great Plains, where I live. According to the National Climate Assessment, developed by U.S. scientists and academics, “Rising temperatures are leading to increased demand for water and energy. In parts of the region, this will constrain development, stress natural resources, and increase competition for water. New agricultural practices will be needed to cope with changing conditions.”

That doesn’t sound too good. 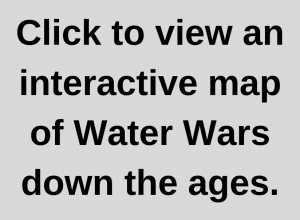 and associated storm surges, more intense droughts, and increased precipitation variability, these changes are projected to lead to increased stresses to water, agriculture, economic activities, and urban and rural settlements.”

Oh, boy. That doesn’t sound too good, either.

“All politics is local,” former Speaker of the House Tip O’Neill used to say. Origins of another famous phrase are less clear, but it’s no less poignant –

Never before has this mantra of environmental action been more apropos.

While the climate crisis is a global problem with thousands of contributors that humankind needs to address right away – there is no time to wait – we can only do that by influencing elected officials, corporations and individuals.

And in Earth’s current plight, our “local” is the United States as a whole.

Three of the most crucial local actions to take:

Our locality is one the worst contributors to global warming and climate change, and therefore to the future potential for Water Wars. It only makes sense, then, that Americans do what’s right to avoid man-made, global disaster for all races of the human race.