American Democracy Hinges on the Only Half Measure Left. Or Right.

Citizens of the United States of America live in two nations, simultaneously side-by-side and a gazillion miles apart.

After paying attention first to the impeachment debacle in Congress, it’s become painfully clear we can’t go on this way.

Make no mistake. The American democracy the Founding Fathers envisioned, a democracy that values truth, facts and the republic’s welfare over party affiliation, is on the line. It is crumbling, being dismantled before our very eyes. If we don’t do something that previously seemed inconceivable, I fear it’s destined for an unceremonious chucking into the dustbin of history.

A bumper sticker I saw on a big ol’ pickup underscores the current, horribly twisted reality of the “United” States of America. It read, “Trump 2020: F@%! Your Feelings.”

Granted, that’s just a snapshot, but the sentiment captures just how far apart we are, people on the left and right.

Lincoln’s admonition is as true today as it was in his day – “A house divided against itself cannot stand.” 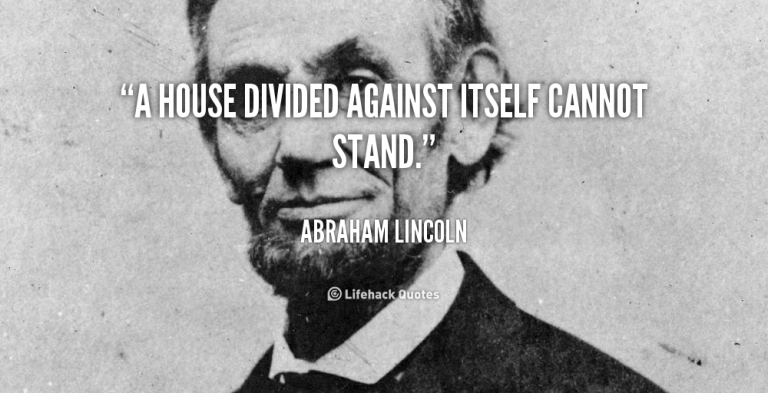 The divide is colossal. Some are more left than others, some are more right than others, but there’s a definite, all-too-hostile line in the sand between people with different beliefs, philosophies and life approaches. It’s made a functioning government, for the people, impossible.

“Re-injecting civility” into our political discourse, even if it could be done, won’t fix this. Actually listening to one another? Nope. Finding “common ground”? No way. Other half measures? Fuhgeddaboudit.

But fear not! We can still secure the future of American democracy.

As I’ve said, the time for half measures is past. Except this one –

Since the great experiment of American democracy can no longer survive in one nation, let’s do two!

I humbly propose we draw a line that’s even more absolute than the one in the sand, a line that crosses creeks, hills and lakes, navigates mountains, prairies and rivers and spans cities and states.

In short, I propose we split the United States of America in half.

More specifically, we should cleave the nation from Cape Elizabeth, Maine, to the southern city limits of Yuma, Ariz., and on to the current U.S.-Mexico border.

This severing will be completely fair. “Perfect” even. Like certain phone calls.

USRA can keep Trump, his draconian policies and the 50 percent his administration has added to the national budget deficit. To be good sports, we’ll take half of what was there before he took office.

USRA will likely change its constitution to allow church and state intermingling; to many righties that’s the ordained relationship, anyway. They’ll probably include language outlawing women’s right to govern their own bodies. I’d also bet theirs will be a single-party system, since that’s what Republicans have been striving for since the introduction of the “Contract with America” about 25 years ago.

USLA, meanwhile, will have a built-in multiparty system. As Rep. Alexandria Ocasio-Cortez has pointed out, “The Democratic Party is not a ‘left’ party. It is a ‘center’ party.” True progressives will counterbalance the middle-of-the-road, establishment, corporate Democrats, who in the USLA will occupy the right. With those two repeatedly stabbing each other in the back (“Et tu, Brute?”), the USLA political system will be off to a striking start.

USLA also will make some adjustments for our constitution, such as incorporating the Equal Rights Amendment; including language that guarantees equal rights for LGBTQ people; clarifying the executive branch’s powers and limitations; and striking hard, red lines through the portion of Article II, Section 1 that established the Electoral College.

We’ll ensure nothing like the Citizen’s United ruling can ever degrade our electoral process, and the Green New Deal will be the law of the left-north land. We’ll also require regular citizen reviews of Senate and House rules to ensure they work for people rather than politicians? Gone for sure.

Cleaning Up the Mess

During its end days, the current U.S. government will resolve any issues that arise from municipalities and states about to be severed by the diagonal boundary and appropriate funds for lefties and righties to relocate to their respective new nations.

It’ll be mildly inconvenient for citizens who have to move, I suppose, and politicians who no longer hold seats. But it must be done. For the greater good. For the future of American democracy!

This bold action will be heralded around the world. Doubt and frustration amongst allies and foes alike will disappear; they’ll always know exactly which America they’re dealing with and, therefore, what to expect. Some will remain allies with both USLA and USRA, some with only one and some with neither.

We can’t control what other nations do, after all.

Unless the USRA president withholds military aid to coerce them into political favors.

The Final Half Measure

As for the pricklier details, nimbler minds than mine will need to work them out. No doubt other adjustments to constitutions and laws will be undertaken at the behest of USLA and USRA citizens, respectively. Perhaps even respectfully.

Indeed, thanks to this final half measure, American democracy will remain alive and well. Just in two Americas. Perhaps even for another 244 years.

The only question remaining, then, is what to name the demarcation line.