Establishment democrat? Progressive democrat? Either way – Admit it. Embrace it. Live it. Own it… Then, come November, vote it. 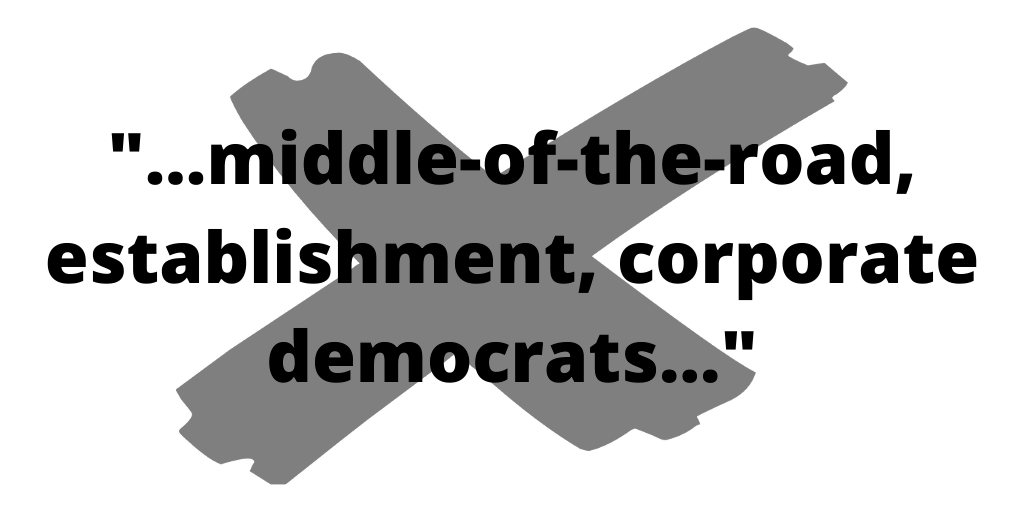 Either way, we must rid the republic of its destroyers – #VoteBlueNoMatterWho

I was informed via an email exchange with DemCastUSA.

To those who complained about my op-ed, “A Modest Proposal:  American Democracy Hinges on the Only Half Measure Left. Or Right,” when DemCastUSA published it a few weeks ago, I can only say…

Admit it. Embrace it. Live it. Own it.

I first posted the satirical piece here on January 31. DemCastUSA published it in early February. I wrote that in the United States of Left America (USLA), a newly formed progressive nation, “True progressives will counterbalance the middle-of-the-road, establishment, corporate democrats, who in the USLA will occupy the right.” (Read the piece for context.)

That line, the DemCastUSA rep said, was “the most problematic.”

“Offended,” she said of the people who were complaining about it.

Strong word, offended. Strong emotion. And when it’s used in reference to something I’ve done, said or written, I kind of like to know why.

“We’ve said that we won’t disparage any Democrats, and we try to be big-tent, so I think it was the ‘corporate’ Dems that set them off,” she said, adding that a “Satire” disclaimer and removal of the “offensive” sentence would probably do the trick. The piece could remain on the website if I’d agree.

The “satire” label? No problem. I tagged it that way on IV Words, anyway.

I was perplexed, however, at the need to identify a piece titled “A Modest Proposal” as satire. Don’t they teach Jonathan Swift in schools anymore?

So, OK, sure. Label and disclaim away.

But remove the sentence?

It was an opinion piece, after all, and a satirical one at that.

To be clear, I’m not unhappy with DemCastUSA. Quite the opposite. I understand and respect its policies, and I applaud its mission –

“To cultivate, amplify & maximize the impact of grassroots digital media, bolstering blue electoral and policy victories at all levels of government, across America.”

I support the organization fully, and I’m happy to help magnify its posts and add to the discussion whenever possible.

The Offended (Few? Many?)

Which brings me back to readers who saw descriptions of themselves as “middle-of-the-road, establishment, corporate Democrats” as problematic. Offensive, even. Or perhaps you objected to being placed at the end of the democratic spectrum that’s opposite progressives. Either way…

Look, people, you’re out there, OK? Middle-of-the-road democrats, establishment democrats, corporate democrats. Admit it. Embrace it. Live it. Own it.

People like me are out there, too. Far-left democrats, green democrats, progressive democrats. We must admit it. Embrace it. Live it. Own it.

We are who we are.

And At the End of the (Election) Day…

That’s why, in the lead-up to Milwaukee, we can – and should – hash out our differences about what needs to be done, what the priorities should be and the most effective ways to take them on. Confidently, respectfully and with conviction.

That said, I’d venture there’s one thing we wholeheartedly agree on right now.

We need to get rid of the #ImpeachedPresident who is gleefully tearing down the institutions, political norms and laws that have, up to this point in our history, sustained our republic. We need to toss out the enablers in Congress who are letting him get away with it, too.

Satirical splitting of the USA aside, we all need to #VoteBlueNoMatterWho.

Admit it. Embrace it. Live it. Own it.

Most of all, come November…

Like this post? Hate it? Either way, scroll all the way to the bottom of this page to leave your comment. Please sign up to receive more IV Words in your inbox while you’re at it.

One thought on “Establishment Democrats. Not With You. But With You.”