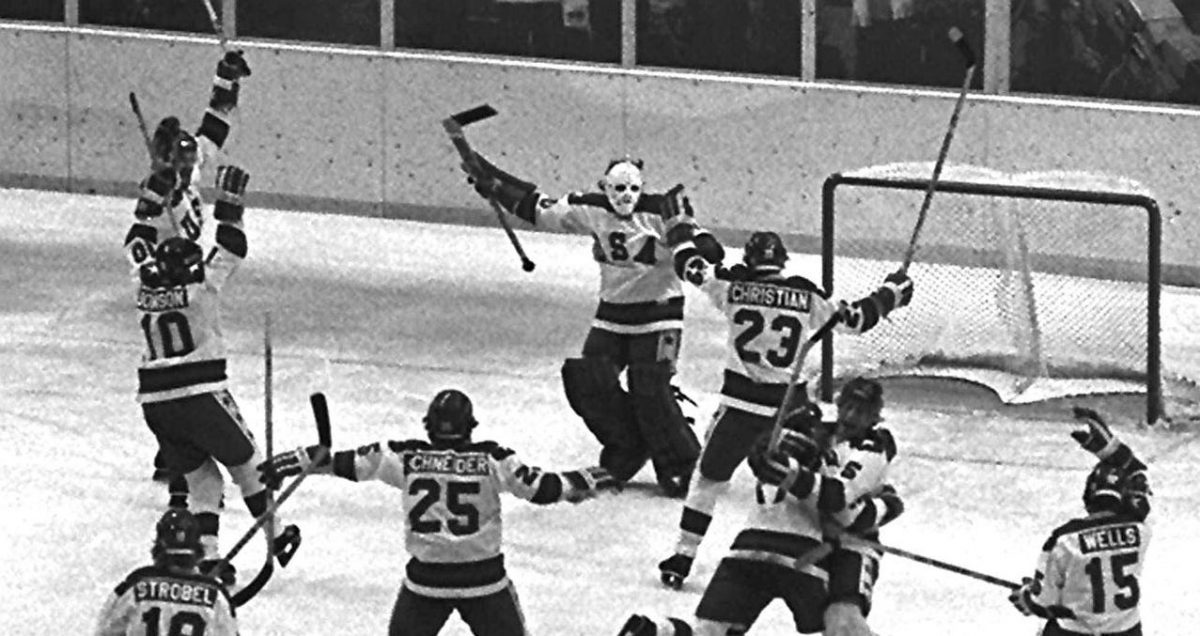 1980 Olympic Hockey Players Snatch Perfection from the Grasp of History

The feeling I had, looking at the pictures of those aging hockey players wearing the Trump campaign’s new red Keep America Great hats, must have been something like what that lone U.S.S.R. players felt as they watched the U.S.A. team celebrate its improbable victory.

The red-clad Soviet players stood at center ice, hands and elbows resting on the tops of their sticks, watching the celebration in the U.S.A. end.

The images of the former U.S.A. players wearing the second revolution of MAGA caps were all over the Internet, brought to the world’s attention in a Twitter post by journalist Soledad O’Brien.

There they stood, behind the most divisive president the United States of America has ever seen, on a stage in Las Vegas. It was 40 years after the underdog U.S.A. hockey team beat the mechanical, unstoppable, unflappable Big Red Bear, but in my mind time snapped back like a rubber band.

It was if they’d never won that game, so shocking was the juxtaposition of two images:  that team’s celebration in a pile in Lake Placid, and the men I saw on my computer screen, lined up behind President Donald Trump, being used as tools of acrimony and projecting a brand of patriotism that flies in the face of what they accomplished 40 years before. The same reality rip apparently was happening in the minds of thousands of others, judging by the reactions on Twitter.

I’ll never forget the image of that one Soviet player in 1980. And if I could have seen myself staring at the screen this past Sunday, I’m sure I would’ve seen the same vacant, incredulous look.

I remember the moment well, along with the looooonnngggg minutes of the third period that preceded it. Eleven years old, watching the game on TV with my parents, family and friends, the hair standing up on the back of my neck. The go-ahead goal, the nerves, people in the room jumping up and down, gasps, close calls… and how many minutes to go? “Do you believe in miracles?!” The final horn. Jim Craig searching the crowd for his father….

It WAS a miracle.

And it came at a perfect time for a nation struggling with horrible economic conditions, watching U.S. citizens in captivity in Iran and on and on. People were feeling bad about the U.S.A. But that win changed everything.

We were a force again! Those nasty Soviets weren’t going to beat us on our own soil! (Never mind that they throttled us 10-3 just a week earlier at Madison Square Garden.) We were unified once again.

The miracle, gone in an instant. Sullied. Snatched out of my chest like a heart ripped out by a barbarian. Fallen from something that lived in perfection in our minds for 40 years to something cheap, dirty, objectionable.

That one word kept going through my head, not over and over again, but as one long syllable stretched into eternity.  NOOOOOOOOOOOOOO….!

I wanted to unsee the image, forget what it meant to my 51-year-old self and suddenly mourning a 40-year-old moment that had made us all proud again. An overjoyed instant previously frozen in time, now imbued with an entirely different, vile meaning.

Marcos Bretón of The Sacramento Bee summed up my feelings almost perfectly:

“When I saw the image of the team as old white men wearing red hats next to Trump, the spell was finally broken. The shelf life for this fantasy had run out for me…. It wasn’t a miracle at all. It was a lucky win that spawned a myth that died when the red hats came out and the truth was revealed.”

“You blew it, guys. For 40 years, your golden moment has stood as a vision of joy, hope and unification. But when you put on the cap of the most divisive figure in our history, that’s gone. You could have been a reminder of what’s good about this country on this anniversary. Bad form.”

This post is also featured on DemCast – Check it out.

Featured image by the Associated Press.