Fargo, N.D. Business “Still In” for Paris Climate Accord Targets

David Crutchfield leaned back on his window-side stool in the warmth of the Prairie Roots Food Cooperative on a cold winter day in Fargo, N.D., contemplating sustainability and climate justice.

The architect and North Dakota State University associate professor was feeling right at home, and no surprise. Over the course of his career he’s designed food cooperatives in cities from Austin, Texas, to New York to London, many of them for well-known sustainable food seller Whole Foods Market.

As at-ease as he is in the warm environs of a store dedicated to providing access to locally grown food, he’s just as comfortable talking about sustainable design and acting on his convictions.

“To me, it’s not enough to agree with ideas,” Crutchfield said. “I’ve found throughout my life that it’s only through collective action that things change.”

One of the clearest examples of Crutchfield’s dedication to collective action is his teaching, where he introduces NDSU students to the practices, theories and benefits of sustainable architectural design. 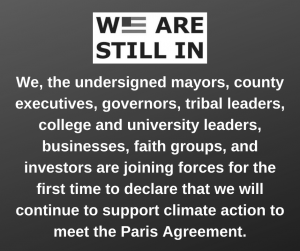 Another is the fact that, until recently, his company, Biome Architecture, was the only for-profit business in North Dakota or within 100 miles of Fargo to sign the “We Are Still In” declaration.

“You have to take those opportunities to put your name on things that align with your values,” he said. “Otherwise, nobody’s going to hear or listen to those particular viewpoints. Advocating for ideas related to climate justice suits my values.”

Still In for Climate Justice

Climate action suited millions of people around the world, so much so that in 2015 the United States and 196 other nations signed the Paris Climate Agreement, which defined emission-reduction targets nations are striving to reach by 2030. However, in June 2017 President Donald Trump announced his intention to abandon the accord, and in November 2019 his administration formally began withdrawing the United States.

Despite that, or to make up for it, 3,800 leaders from more than 3,000 entities across the country have signed on with We Are Still In.

We Are Still In is a collective effort to achieve the United States’ commitments to reduce emissions from fossil fuels, which are the prime contributor to human-caused global warming and climate change. Signatories include businesses, investors, cities, counties, colleges and universities, cultural institutions, faith-based groups, health-care organizations, investors, states and tribes across the country. In addition to declaring their commitment, signatories also can submit plans and track their own “Climate Action Contributions” through the We Are Taking Action Campaign.

Even though thousands of entities around the country are signing on, Biome Architecture remains one of only two in North Dakota that has made the commitment, and one of only three within 100 miles of Fargo.

Crutchfield came to Fargo after earning his master’s degree in sustainable design from the University of Texas at Austin.

He’d already been working as a licensed architect for two decades when he started his master’s program. In addition to cooperatives, he’s designed everything from aquatic complexes to churches, commercial buildings to movie theaters and hospital emergency rooms to shopping centers.

The Texas program included study of mechanical systems, efficiencies of design, designing for climate, understanding energy use, and designing for the relationship of environment, equity (social equity) and the economy, also known as the “Three E’s.”

“I tend to add a fourth onto that, which is aesthetics,” Crutchfield said. “If you don’t love it, how sustainable is that? If it’s an unpleasant place to live, even though it’s efficient and equitable, what kind of world is that? So, it’s important to be in a pleasant environment, and that’s a question of design.”

Along the way, Crutchfield found he had a talent for mentoring younger architects in the firms where he worked. He decided he wouldn’t mind sharing the Three E’s and an A with university students. He applied for university faculty positions across the United States, narrowed the offers down to two and in 2007 began his official teaching career in the NDSU Department of Architecture and Landscape Architecture. He teaches courses in environmental control systems, as well as advanced design studios and professional practice seminars. He also conducts research into the social and aesthetic drivers behind what humans build.

“On a daily basis, I try to pass on that message of responsibility for our environment, for social equity and for economic balance,” he said.

Yet another is Biome Architecture. He launched the company in 2014 for a variety of reasons, not the least of which was a desire to be able to teach students about starting and operating firms based on his own real-world experience.

“I’ve gone through all the issues and aggravations of starting and running a firm,” he said. “That was important for me in terms of professional development, but also because now I can tell my students how to start their own firms.”

As for the company name, it reflects Crutchfield’s view of how the world needs to work.

A biome is a biological system of elements, plants and animals that live together in a particular place under specific environmental conditions.

“I tend to think of humans the same way, he said. “We’re subject to where we live, among the plants and animals that live and work together in a particular place, and I want my architecture to be a response to that.”

The first opportunity for Biome arose even before Crutchfield launched the company, and he took it all the way to zero.

Biome achieved those benchmarks for its first client and first project, a two-bedroom home, garage and shop on a central North Dakota family’s original 1880 homestead. 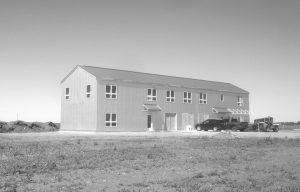 The long, rectangular structure is in the middle of a beautiful expanse of farmland, oriented east to west for maximum solar exposure year-round. The super-efficient design includes elements such solar panels, a hydronic radiant-floor heating system, energy recovery ventilators, insulated slab-on-grade, and a corrugated metal exterior built with polyurethane structurally insulated wall and roof panels that are extremely fire resistant. It even has a rainwater-harvesting system. The building requires no energy inputs other than those built into it.

The goal, Crutchfield said, was to design something that would be self-sustaining and therefore could be entirely “off the grid.”

“There are green buildings, and then there’s this,” he said. “We’re beyond LEED at this point.”

LEED is a reference to the requirements for Leadership in Energy and Environmental Design certification through the U.S. Green Building Council.

Crutchfield is pleased with that, but says he’s most proud of designing a sustainable structure that cost only $98 per square foot to build, less than the $100 to $200 it can cost to build a traditional, energy-consuming home.

“To me, again, that goes back to the Three E’s,” he said. “We’ve made a model that can be reproduced for someone who’s interested in having that kind of building. I could show them this client’s house and say, ‘Ninety-eight bucks a foot. How can you beat that?’”

“I’m interested in clients who, number one, agree with sustainable methods, and number two, aren’t afraid to spend some time thinking about how that process is engaged,” he said. “I’m not reliant on (Biome Architecture) for income, but if people are interested in the same kind of idea, the same kind of design, I’m open to that.”

In the meantime, the associate professor maintains his commitments to students, research and community service, part of which might be considered his signature on the We Are Still In declaration.

The other North Dakota business that has signed the We Are Still In declaration is Fargo-based Fredricks Communications. The University of Minnesota-Morris is the only other signatory within 100 miles of Fargo. See who else is in.

Like this story? Please scroll to the bottom of the page to leave your comments and sign up to receive more IV Words in your inbox.