“We Have No Other Choice”

About 25 RRVCA members have been collecting signatures on a “Resolution endorsing the declaration of a climate emergency” since Feb. 16, 2020. As of March 1, the group had collected several hundred signatures. The group has suspended face-to-face signature collection until further notice due to social distancing recommendations related to the coronavirus pandemic, but Fargo and Moorhead citizens can view and sign the petition online through The Action Network.

The petition forms lay out a statement of purpose for the RRVCA effort:

“We are proud that our communities always come together during crises. Our response to climate change should be no different. We must mobilize at the scale necessary to realistically respond to the massive existential problems we face. Even though our leaders and federal and state governments have failed to act, we can and must begin developing community plans to mitigate and adapt to climate change. We have no other choice.”

That perfectly captures the feelings of Ryan Livdahl, a sophomore at Fargo South High School and RRVCA member who has been collecting signatures. He believes the majority of people in Fargo-Moorhead support climate action but haven’t had enough opportunities to speak out. The drive to collect signatures has given some of them a voice, he said.

“I think we here in Fargo really undervalue how important we are, specifically in the context of the rest of North Dakota,” Livdahl said. “We’re in a place where we can inspire change in the rest of the state, and maybe elsewhere, if we take a step forward ahead of the rest of the cities and declare a climate emergency.”

“This should be important to everyone,” Penner said. “I’m 16, and when I grow up I want to be able to live on an earth that isn’t dying. We don’t have much time because it’s going to continue dying until it sputters out. If we can stop what we’re doing so it helps alleviate the issue in the world a little bit, that makes a difference.”

“There are many ways we can decrease our carbon footprint, so we don’t want to get bogged down by trying to push any specific project or policy at this point,” Francis said. “The time for those debates will come after we have acknowledged the problem and made a commitment to address it.”

Generally speaking, emergency declarations triggers various types of government assistance and resource availability for citizens, cities, counties and states. What Fargo and Moorhead declarations might mean or make possible won’t be clear until the cities actually develop and approve them.

“We need to look at the science as best we possibly can, and then figure out what kind of investments we need to make not just for now, but for the immediate future and the longer-term future,” she said. “I think if our local governments say, ‘Hey, we’ve got to put this down on paper. This is not going to go away,’ and the sooner we recognize that, some positives can come out of it in terms of how we work together to make our communities resilient.”

RRVCA members hope the next steps will be for the cities to form climate emergency task forces to work on policies. Francis said the task forces should be demographically diverse and include representation from the city governments, the private sector and citizens from all neighborhoods within the cities.

RRVCA intends to present its climate emergency petitions and declaration templates to the Moorhead City Council during its April 13 meeting, and to the Fargo City Commission on April 20, dates that loosely coincide with the 50th Anniversary of Earth Day on April 22. Francis said that if the coronavirus pandemic derails those plans, the RRVCA will move forward as soon as it is once again possible.

Like this story? Please consider buying IV Words a cup of coffee. If nothing else, scroll to the bottom of this page, leave your comments and sign up to receive new IV Words posts in your inbox. Thanks! 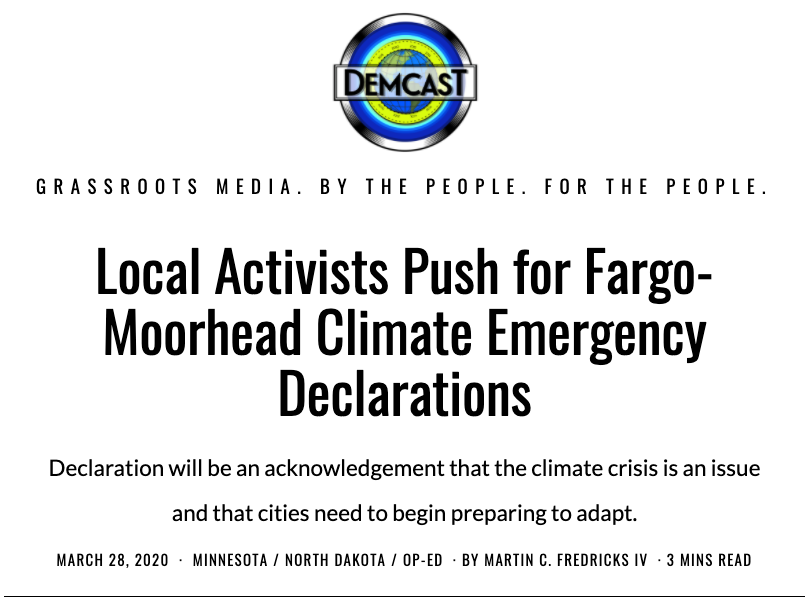