The Securities and Exchange Commission needs to investigate and call bullshit on the load of crap North Dakota’s senior senator is trying to sling.

Sen. John Hoeven, R-N.D., has been caught with his hand in the cookie jar, and he’s trying to tell us that since his digits haven’t quite curled around a treat yet, he’s done nothing wrong.

According to a story first reported on CNBC, Hoeven purchased stock in the BlackRock Health Sciences Trust II fund five days after receiving a briefing on the coronavirus. After that same briefing, several of his colleagues sold off shares of stock, presumably in anticipation of the market taking a nosedive due to the crisis that was coming. As they’d just been told by “health and State Department officials.”

As The Hill reported, “According to financial disclosure forms, Sens. Kelly Loeffler (R-Ga.), James Inhofe (R-Okla.), Dianne Feinstein (D-Calif.) and Richard Burr (R-N.C.) each sold hundreds of thousands of dollars in stocks within days of the Senate holding a classified briefing on Jan. 24 with Trump administration officials on the threat of the coronavirus outbreak.”

Since he hasn’t avoided the loss of millions, like his colleagues, Hoeven’s still flying a bit under the radar. But that certainly doesn’t me he’s done nothing wrong.

According to CNBC, in his denial of any wrongdoing, “Hoeven said his situation is nothing like that because his colleagues were selling stock, whereas he was buying it.”

Hoeven went on to say – as if it were proof that he’s done nothing wrong – that so far he’s lost money on the investment.

“Gee, it didn’t work out so well for me so that means I didn’t do anything wrong,” is not a legitimate defense. If that logic held, every bank robber who ever got caught would be innocent.

And with Hoeven’s background in the financial industry, it’s inconceivable that he doesn’t understand that.

We Don’t Believe in Coincidences

According to Eric Reed on The Street insider trading is:

“[T]he purchase or sale of a security of any issuer, on the basis of material nonpublic information about that security or issuer, in breach of a duty of trust or confidence that is owed directly, indirectly, or derivatively, to the issuer of that security or the shareholders of that issuer, or to any other person who is the source of the material nonpublic information.” (Emphasis added by IV Words.)

It would be one hell of a coincidence if Hoeven received the briefing and five days later just happened to invest in a fund that “contains shares in medical device and pharmaceutical companies.”

Whatever else happens during this coronavirus crisis, companies that make medical devices and manufacture pharmaceuticals are highly likely to make a lot money, from the federal government if from no one else.

As for the investment advisor telling Hoeven about the health sciences fund, Hoeven didn’t need that guidance. He would have already understood that health sciences stock values were bound to fall with all the rest in the short term, but they’ll be the ones to rebound more quickly when the federal government finally starts responding in earnest, buying the necessary medical equipment and devices that our nation’s frontline health-care providers so desperately need.

So, excuse me, but Sen. Hoeven must think his constituents are either very stupid or very gullible.

Even some of his Republican colleagues in the Senate are now calling for an investigation into all of this by the Securities and Exchange Commission.

That needs to happen, and the commission needs to call B.S. on the load of crap North Dakota’s senior senator is trying to sling.

Like this opinion post? How about buying IV Words a cup of coffee? If nothing else, please scroll down, leave your comments and sign up to receive more IV Words in your inbox. Thanks! 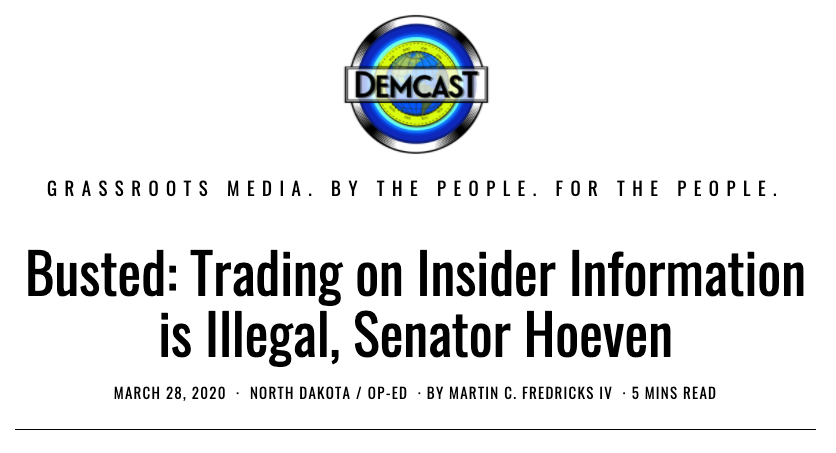