Sen. Kevin Cramer, R-N.D., has once again embarrassed the citizens of the state he is supposed to represent.

Yesterday Cramer tweeted about Speaker of the House Nancy Pelosi. “She’s retarded,” he wrote in reply to a post by Daily Caller about Pelosi’s comments regarding COVID-19 relief bills. 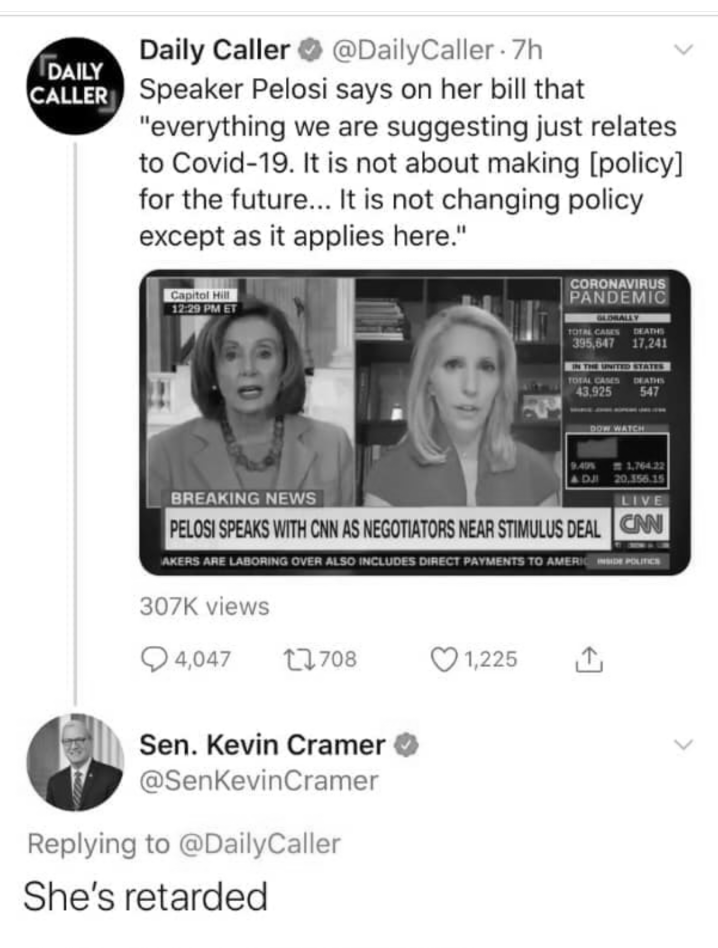 Today – in the spirit of the Nixon White House responding to a Washington Post story about the Watergate scandal, a response that Editor Ben Bradlee famously called a “non-denial denial” – Cramer issued a “non-apology apology.”

Cramer behaved no better than Nixon and his communications staff in blaming the tweet on fumbling fingers and autocorrect, saying he was attempting to tweet, “She’s ridiculous.”

He must think people are either terribly stupid or incredibly gullible.

Try misspelling “ridiculous” in as many ways as possible. Your autocorrect will not substitute in “retarded.” It’s simply not possible. I just tried it myself. Instead of seeing autocorrect default to “retarded,” it gave me an opportunity to learn a new word. In case you were wondering, “reticulated” means “netted,” or “covered with a network.” Who knew?

What was it Forrest Gump’s mama always used to say? Ah, yes, “Stupid is as stupid does.”

Unfortunately, the news media is calling his “non-apology apology” an actual apology, which it most certainly is not. The headline from U.S. News is typical:

“US Sen. Cramer Apologizes for Offensive Term About Pelosi”

That is not accurate.

What he said was, “I’m really sorry it happened.”

Well, heck, I’m sure he is really sorry it happened. News outlets all of the nation have been carrying the story and he comes off as an insensitive, distasteful person to say the least. I’d go so far as to say he’s made himself look like an imbecile. Apply your own judgement.

Regardless, I’m willing to bet there are a lot of people around the country who are wondering how this man ever became a U.S. senator. Let me tell you what I believe, non-North Dakotans:  if this state wasn’t so doggone deep red, he wouldn’t have had even an inkling of a chance.

Regardless, what he said was a non-apology apology, and it’s not adequate. What he needs to say is, “I apologize TO SPEAKER PELOSI for using such an offensive word to describe her.”

So easy, in fact, that the vast majority of us learned how to make a proper apology before we started kindergarten.

Finally, he needs to stop insulting our intelligence. Drop the “ridiculous” charade and own up to what he Tweeted rather than trying to blame it on technology.

Inasmuch as anything like this can be made right, Cramer needs to make this right with a real apology. He owes it to Speaker Pelosi, to the office she holds, the citizens of the nation and, last but not least, the people of North Dakota.

But I wouldn’t hold my breath.

Cramer, like most kindergarteners and former Watergate operatives, probably believes he can keep quiet by holding his longer, anyway.

Like this opinion post? How about buying IV Words a cup of coffee? If nothing else, please scroll down, leave your comments and sign up to receive more IV Words in your inbox. Thanks! 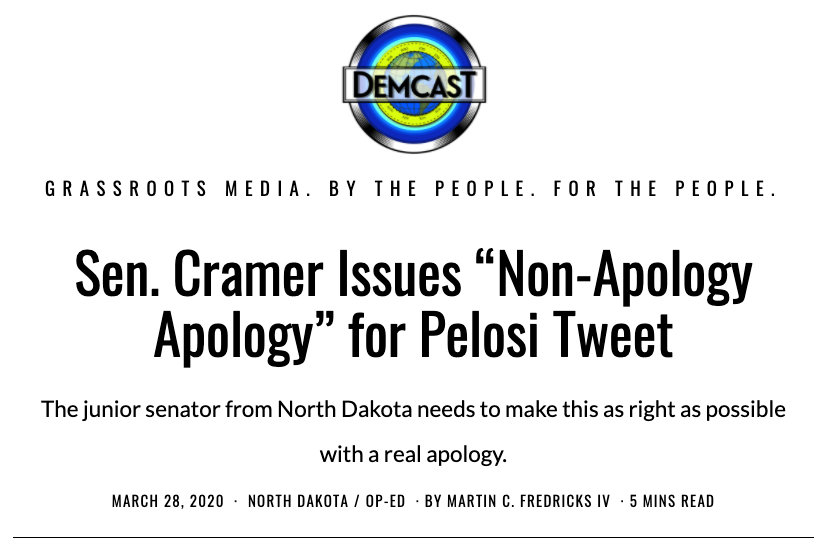