Skip to content
Martin C. Fredricks IVApril 22, 2020Climate CrisisLeave a Comment on A Ray of Light Through Climate Crisis Smog

The oil industry’s “doomsday scenario” is actually a ray of light through the smog for everyone else. Even, frankly, for its own workers.

These companies are crumbling because of a combination of factors, with the two most important being an oil price war between Russia and Saudi Arabia and falling demand because people are staying at home through the COVID-19 pandemic. Stay home. Drive less. Reduce oil demand.

But in truth, fossil fuel industries have been propped up by subsidies for decades and some, like coal, have been dying for years.

Given the increasing cost-competitiveness of alternative energy, the fact that oil, coal and gas are going to run out, and growing public demand for energy that doesn’t simultaneously drive our lives and threaten to end them, now is the time to pivot decisively to renewables.

Bail Out a Harmful Industry?

The oil industry already gets too much of our money.

According to the Environmental and Energy Study Institute, “Conservative estimates put U.S. direct subsidies to the fossil fuel industry at roughly $20 billion per year; with 20 percent currently allocated to coal and 80 percent to natural gas and crude oil.”

And that’s just in the United States.

So why, from a basic dollars and cents point of view, why would we throw good money after bad, as the old saying goes?

It makes even less sense when you factor in fossil fuel industries’ direct and indirect contributions to ecosystem destruction, global warming and the resulting climate crisis, an ongoing event that will dwarf the loss of life and economic insecurity caused by this global pandemic. And they have known for decades that their activities and products have been harming Earth and threatening life as we know it.

From where we stand now, in just 10 short years the planet will pass tipping points that will accelerate climate change and catastrophe for human beings around the globe.

So why on Earth – and I do mean why on EARTH – would we, the taxpayers of the United States, step in to save that industry? We would essentially be paying for the decimation of everything we need to survive, and potentially our very lives.

Only a fool would do such a thing.

Such a stupid, stupid thing.

Which brings us back to Trump.

He’s going to do it, and his enablers in the U.S. Congress are going to help.

A Fork in the Climate Crisis Road

There’s a much smarter, more sustainable and, in my judgment absolutely crucial way, one that will not only address the problem of our flailing economy due to the pandemic, but also will pull us back from the brink of certain climate calamity.

Imagine what our scientists and engineers and inventors could do with whatever undefined billions that could be injected into fossil fuels industries sometime in the next month? And what could they do with the $20 billion annually that will no longer be needed for soon-to-be extinct industries that have been driving us toward early demise for more than a century? Think of the potential of researching and developing new sources of renewable energy and improving the ones we already have, along with the technology, equipment and energy storage systems needed to sustain them. Consider for a moment what using that money to invest in a Green New Deal, with projects that create jobs for hundreds of thousands of U.S. citizens, would mean for our nation.

And right now, when most industries are partially or completely shut down around the world, is the time to do it.

Rather than an oil industry bailout, we, the citizens of the United States through our government, need to invest instead in renewable energy R&D and provide other funding to retrain workers for good green jobs. Build a new, better, more equitable and sustainable economy.

There’s Work To Be Done

According to The History Channel, “Earth Day was the brainchild of Senator Gaylord Nelson of Wisconsin, a staunch environmentalist who hoped to provide unity to the grassroots environmental movement and increase ecological awareness.”

It would be interesting to know what he’d think about where we are now.

Five decades of environmental consciousness have resulted in a generation that believes in doing what’s right and necessary for people first, eschewing short-term, privileged greed for long-term security and viability. The 50 years have brought tremendous advancement in renewable energy, despite a general lack of investment by governments. The time and countless dedicated people have led us to serious public discussions about a Green New Deal and other environmental and social justice legislation and laws.

Even though we’ve made progress and won some battles, we’re losing the war. However, within our grasp right now is one fell swoop that can help change everything forever. This can be our Moon Shot.

Rather than propping up industries that are destroying our home – Earth – and killing us, let’s invest instead in a cleaner future, one that will sustain the human race for decades and centuries to come.

Fossil fuel industries are a roadblock to the future we need.

Like this opinion post? How about tossing some change IV Words’ way, a.k.a., “buy us a cup of coffee”? If nothing else, please share, then scroll down, leave your comments and sign up to receive more IV Words in your inbox. Thanks! 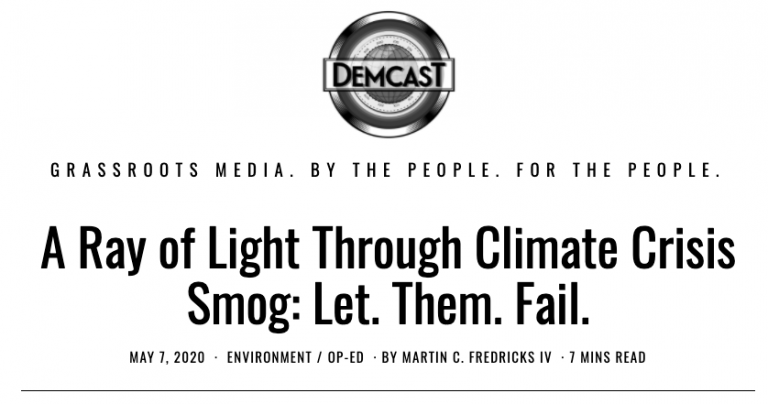