The profoundest of all the statements in the new documentary “Planet of the Humans” is the one left unspoken.

It comes in the final segment of the film, which was written, narrated and directed by self-proclaimed environmentalist and filmmaker Jeff Gibbs and produced by Academy-Award-winning filmmaker Michael Moore. If the scene doesn’t leave you devastated, have someone check your pulse to make sure you’re actually a living, breathing and feeling human being.

Assuming you find proof of your humanity, then you’re also a being whose existence on planet Earth, a.k.a., “Planet of the Humans,” is intertwined with every other living thing. As such, your future existence depends on what we do to protect them, and ourselves, over the next decade.

Also intertwined in the film are highly recognizable figures in advocacy organizations that tout renewable alternatives to fossil fuels, as well as many individuals and companies that finance or run them.

Viewed through the lens of environmentalism, it seems at first viewing to be a horrific intermingling, indeed.

“Planet of the Humans” will force people, especially environmentalists, to question many of the truths we’ve always believed to be self-evident, that “renewable” energy is intrinsically good, that the people leading the “green revolution” are beyond reproach, and that if we keep pushing we’ll figure out this climate crisis thing and be O.K.

The film’s power lies in its straight-forward look at how “renewables” actually come about, baseline causes of the climate crisis, and what it all means for the future of the planet. Gibb follows the realities of so-called “Green Energy” and connects the dots between renewables, the fossil fuels they depend on for viability and the people who benefit from the connections.

In the process, the film effectively and frighteningly raises several questions, old and new. Some it begins to answer but doesn’t quite close the deal. Others are left dangling from a couple of limbs on a dead tree in a clear-cut section of the Amazon rainforest:

Along the way we see wind turbines, solar panels and biofuels plants. We meet academics like Richard York, an environmental sociologist at the University of Oregon, and Nina Jablonski, an anthropologist at Penn State University. We see or hear from villains like the Koch brothers, business titans like Richard Branson and, according to Gibbs, flawed environmental leaders like the Sierra Club’s Michael Brune, Bill McKibben and even former Vice President Al Gore. Greta Thunberg, who makes a brief cameo, seems the only environmentalist in “Humans” who isn’t at least partially compromised by the malicious nature of capitalism.

But Let’s Not Be Too Hasty

The documentary, released on YouTube on April 21, has been lambasted by groups and individuals, some of whom do not wind up looking like what they have always seemed.

On Friday, April 24, Films for Action, another venue for viewing “Humans,” removed the documentary from its site. But only for half a day, during which the organization was criticized heavily for censorship, and then Films for Action put “Humans” back up, with explanation.

The details are crucial to the discussion, and according to multiple sources many the details on renewables in the documentary are misleading or flat-out wrong.

Here’s a representative critique by Leah C. Stokes, a political scientist at the University of California Santa Barbara. 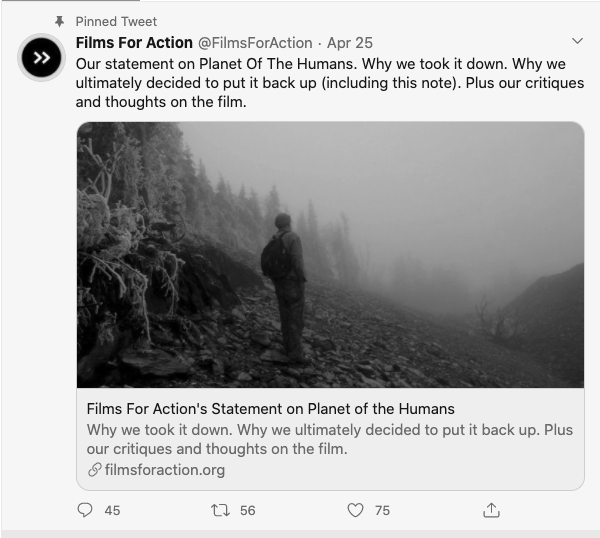 Be that as it may, the simple, core question that Gibbs begins “Humans” with remains clear and frightening:

How long do you think we humans have?

The documentary closes with the deafening silence of a scene that portends one of humanity’s possible futures.

The valid questions raised in between demand answers, and as noted previously, many of them already have them. In fact, Films for Action’s explanation provides a lengthy list of sources that refute what “Humans” presents. But others have been talking about the grains of truth to what Gibbs says and the dots he connects for a long time.

Regardless, for this self-proclaimed environmentalist, the film serves a few purposes. First, it’s a reminder that every “fact” needs to tracked down and verified. Second, truth can be nuanced. And, third, Gibb’s first question still needs to drive everything our species does and doesn’t do over the next decade, when the world begins to pass crucial climate change tipping points.

How long do you think we humans have?

“Planet of the Humans” is an engaging look at the climate crisis, renewable energy production and how it’s affected by capitalism. It’s well worth a cynical viewing.

Like this documentary review? How about tossing some change IV Words’ way, a.k.a., “buy us a cup of coffee”? If nothing else, please scroll down, leave your comments and sign up to receive more IV Words in your inbox. Thanks!