“Southern trees bear a strange fruit / Blood on the leaves and blood at the root / Black bodies swinging in the southern breeze / Strange fruit hanging from the poplar trees.” – Lyrics and music by Abel Meeropol, recorded by Billie Holiday in 1939. Listen.

Judgements are being tossed about like tear gas canisters launched into crowds of people.

As we share thoughts and opinions about the murder of George Floyd and who is doing what, and as we debate the good and bad of peaceful protests, violent riots and all the complex, related issues in the wake of Floyd’s death, I suggest we keep this gruesome pair of visions before our minds’ eyes:

Black man on the pavement, white police officer kneeling on his neck.

There was a peaceful march in my city, Fargo, N.D., on the morning and afternoon of May 30. Black Lives Matter organized the protest to remember Floyd, a Black man murdered at the hands (knees) of White police officers in Minneapolis on Memorial Day, and to draw attention to ongoing, systemic racism and police brutality in the United States.

That evening, protesters refused to leave downtown. The mayor declared a state of emergency. Police used tear gas to force them to move. Some in the crowd began overturning garbage dumpsters in the streets, lighting fires, breaking windows and throwing things at the cops.

The city’s citizens watched it happen live on TV. As the situation unfolded, many “upstanding White folks” decried the violence and property damage on social media. They also shared rumors that out-of-state agitators were entering the city and encouraging protesters to riot.

“This isn’t anyone from our city,” they said collectively. “The outsiders are extremists who want to see the nation burn and hope for a second civil war. They’re to blame.”

“If someone is going to be more animated, self-righteous, and angry about property damage than they are about the death of yet another black American at the hands of white supremacy or the state itself, then they themselves serve as fundamental proof of the reason why these demonstrations are necessary in the first place,” wrote Lauren Martinchek in her piece, “Riots Are the American Way.”

As protesting and rioting have continued in cities across the United States, I’ve been grappling with the outside agitator storyline. To me, it seems to be yet another attempt to create yet another “other,” to distract people from the bigger picture of what the protests and riots are all about.

Even the people pushing the outsider narrative seem a bit befuddled. 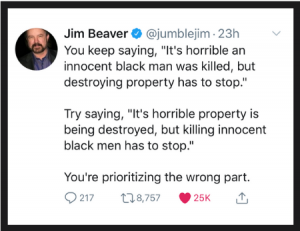 That’s one hell of a logic pretzel.

As for me, I believe there are agitators. I also believe regular people who have had enough are participating in the riots, expressing their sense of hopelessness in extreme ways.

The protests and riots are two versions of the same desperate cry from people who have had enough of waiting for the establishment to address institutional racism and economic inequality.

And, really, how “extreme” are these actions in the context of centuries of violent degradation, systematic disenfranchisement and, at worst, murder without consequence?

As Black Lives Matter Global Network Co-Founder Alicia Garza told The New Yorker, “It’s a familiar pattern: to call for peace and calm but direct it in the wrong places. Why are we having this conversation about protest and property when a man’s life was extinguished before our eyes?”

All of this detracts from the main points.

Rather than spending time and energy on the distractions, keep a clear eye on the people who have endured lifetimes of degradation at the hands of Whites; who have been kept down economically generation after generation; who have tired of a political system that never takes positive actions or, when it does, systematically undermines them over time; and who live in fear for the safety of their husbands, brothers, sons, fathers, uncles and friends when they walk out the doors of their homes.

Above all, stay focused on the fact that White police officers keep killing Black men like George Floyd.

Because, despite all the years, all the peaceful protests, violent riots and best intentions, bloody feet still swing under the poplars, not just in the South, but across our nation. 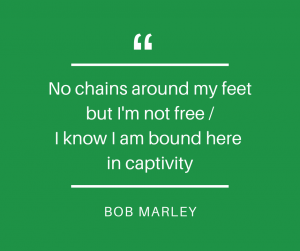 In the words of New York Governor Andrew Cuomo, “When we start to analyze this situation and the reaction, let’s not make the same mistake that we continually make…. It is not an isolated incident. It is a continuum of cases and situations that have been going on for decades and decades and decades. These are just chapters in a book, and the title of the book is ‘Continuing Injustice and Inequality in America.’” Watch.

In 1999, Time magazine named “Strange Fruit” one of the top 100 songs of the 20th century. If we’re not careful, and proactive, it could be a contender for the 21st century list, too.

Bloody Black body in a tree.

White knee on a Black neck.

Like this opinion post? Hate it? Somewhere in between? Wherever you land, please scroll to the bottom of the page to leave your comments and sign up to receive more IV Words in your inbox. And please consider buying us a cup of coffee. Thanks! 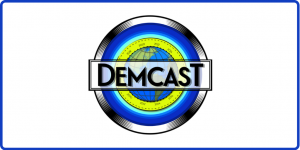 Featured image: Demonstrators push a burning dumpster toward police during a protest over the death of George Floyd, Saturday, May 30, 2020, near the White House in Washington. Floyd died after being restrained by Minneapolis police officers. Photo by Even Vucci, Associated Press