It felt good to call out a bigot and see some consequences. But at the same time there was no pleasure in it at all. 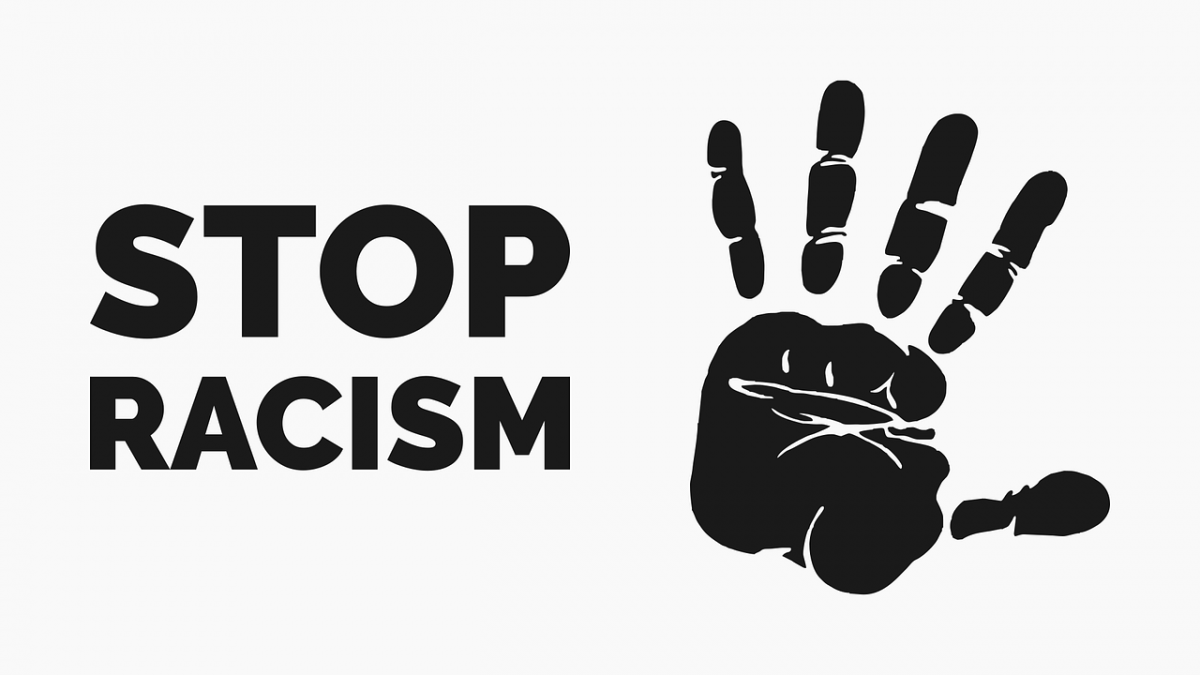 There can be no sympathy for this racist woman.

On July 7 OneFargo held a press conference at Justice Island (a.k.a., Island Park) in Fargo, N.D. KVLY-TV streamed it live.

During the press conference, OneFargo leader Wess Philome addressed several issues OneFargo has been working on related to systemic racism in the Fargo community, as well as alleged harassment of a Black resident by Fargo police officers the previous week. Live comments streamed under the live video.

Jean Horn of Thief River Falls, Minn., engaged in the conversation. “No one owes YOU and (sic) kind of explanation you baboon.”

Now, there’s showing off one’s ignorance. There’s behaving like an indisputable jackass. There’s breaking the rules of online communication. There’s publicly flouting societal mores. And then there’s making a clearly racist statement. In public. For the entire world to see. And screenshot.

Which is exactly what many OneFargo supporters did.

Make no mistake, using the word “baboon” to address or describe a Black person is racist. There’s a long history of white supremacists equating Black people to apes and monkeys. It’s called “simianization,” and they’ve used it as a tool for “desocialisation and dehumanization” for centuries.

Which is probably why Philome posted one of the screenshots on Facebook the next day. He paired it with another screenshot, this one of Horn’s Facebook bio. 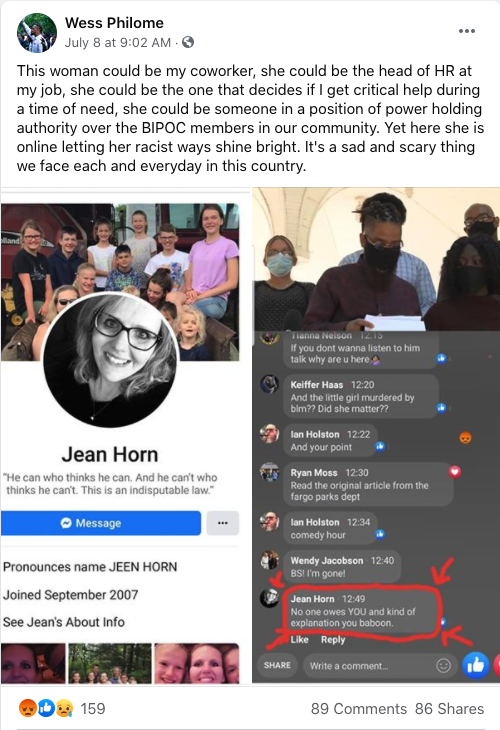 It didn’t take long for the comments to pile up. People were outraged.

Another called Digi-Key, then emailed the customer service representative a link to the recorded press conference and the screenshot. The OneFargo supporter’s email to Digi-Key ended this way –

“If this Jean Horn is indeed employed by Digi-Key, I strongly urge Digi-Key to dismiss her from her position. I’m sure your company does not need the kind of press this woman is generating through her blatantly racist comments in a public forum.”

A manager returned the call. To her credit she took the allegation seriously. However, while looking at the recording and screenshot, she kept asking what Philome was saying at the moment Horn posted her racial slur. After several out-loud wonderings by the Digi-Key manager, the OneFargo supporter finally replied, “Ma’am, it doesn’t matter what he was saying when she commented. She called a Black man a baboon. That’s all we need to know.”

The OneFargo supporter shared the Digi-Key HR person’s email address in the Facebook string and urged others to contact her.

It had an impact.

Not much later, people who contacted the company received this email from another Digi-Key employee, this one its senior manager of employee relations:

Thank you for reaching out. While I understand that you received a response from (our customer service representative), I wanted to follow-up.

Please know that Digi-Key does not condone racist or discriminatory behavior of any kind. Upon being notified, Digi-Key took swift action to place the employee on administrative leave while the situation is reviewed. It will be handled in a just and appropriate manner in accordance with company policies. The comment made by our employee does not in any way reflect Digi-Key’s beliefs or values. The employee is not in a position that has authority to speak on behalf of Digi-Key and was not acting as a representative of our beliefs or values in her social media post. We are committed to fostering an environment where diversity is valued and celebrated as well as one where employees will be held accountable for actions that detract from that.

Digi-Key handled the situation relatively well initially. However, it’s not clear what long-term, permanent consequences there will be for Horn, if any.

About That “Thank You”…

I say “Thank you, Jean Horn” because, as Philome was speaking, she provided in real time a perfect example of what Black, indigenous and people of color are forced to deal with daily. She also made it possible for people to do something about it.

Horn “regretted” it later. She posted an “apology,” probably when she realized she’d drawn attention to her racism, people were condemning her for it on social media and there could be more serious impacts on her life.

No doubt Horn’s regret grew exponentially when her employer put her on administrative leave.

The company’s action was a tiny victory for people who got involved and contacted Horn’s employer.

It felt good to call out a racist and be part of a group action that ensured there were real consequences, that she didn’t just get to do what she did and walk away unscathed. At the same time, there was no pleasure in it.

Actions, beliefs and statements like Horn’s simply should not be. No one should ever have to take another person to task for racist actions, beliefs or statements that harm people just because of the color of their skin, where they come from, what they believe or who they love.

But that’s the world we live in, and that’s what people did this time. Because, as the signs in the streets have stated emphatically:

* Correction – This post has been updated from its original version, which identified Wess Philome as a leader of both OneFargo and Black Lives Matter – Fargo/Moorhead. Philome is not affiliated with Black Lives Matter.

Featured graphic: by mmi9 via Pixabay.

2 thoughts on “Minnesota Racist Outs Herself in Real Time”