Pandemic or no, put others first.

There’s a strip of green grass along the east- and west-running 20th Avenue South in Fargo, N.D., where I live. It parallels Interstate 94, and its 25-or-so-foot width runs about six city blocks. Trees border its north edge, and along the south edge a chain-link fence with tall shrubs and trees on the other side separate the strip from the Interstate ditch. Heavy-duty power lines supported by massive metal poles run through it.

The lush green is a great stretch of my daily constitutional, a strip of softness offering my dogs’ pads respite after walking a couple of miles of hard concrete sidewalk around our neighborhood. Lots of great smells there, too, and once in a while a cottontail to tease them along.

We don’t make the best time along the green strip. By the time we reach it, my long-haired dachshund, Zoey, needs a break from the pace set by Lucky, my black lab-spaniel cross. She has to keep her little legs pumping furiously to keep up, and given her age she’s pretty tuckered out by that point. Zoey’s about 12, Lucky’s only 3 or so; they’re both rescue dogs so we can’t be totally sure of their ages. 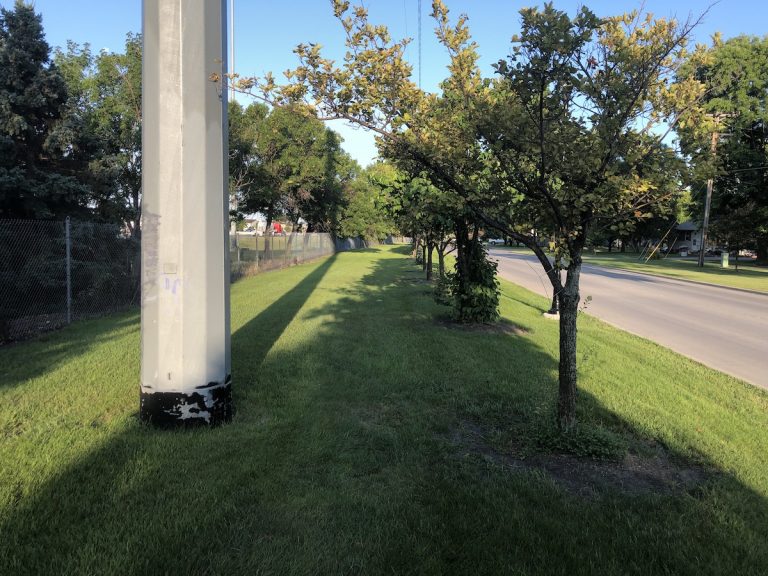 There can be lots of bottles and cans along there, too. I think maybe kids toss them out so there won’t be any evidence if they get pulled over. Could be adults headed home after a night too long, too, people who don’t want spouses to find bottles on the floors of their backseats the next day. And, sadly, I think some of them are scattered by people who really don’t give a shit if someone else has to clean up their mess or that broken glass could gouge into a dog’s paws.

The other day we were making our way down the strip toward our house when I noticed something at the base of one of the trees. As we got closer, I realized it was a clear beer bottle propped against the tree’s base.

I squatted down to get a better look, then turned to look farther down the strip in the direction we’d been walking.

For an unthinking moment I believed maybe I’d catch a glimpse of my father hiking along ahead of us.

Dad’s been gone 17 years now. Obviously all I saw was the empty strip of grass, sparkling damp with the morning dew.

But propping an empty bottle against a tree like that? That was so Dad. 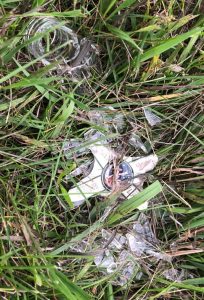 I imagined him breaking stride, bending over to pick up the empty, taking a couple of his giant, 6’5” steps toward the tree and bending over again to lean it up against the trunk. He’d rise up, turn to me, say, “Don’t want anyone stepping on that, twisting an ankle or hurting someone’s dog.”

I actually heard his voice.

By propping the bottle against the tree it’d be more likely that the city employee who mows that stretch would avoid running over it and breaking it into pieces, he’d tell me. Maybe they would even get off the machine to pick the bottle up, take it away.

Even after 17 years, I still run across things Dad did without thinking twice, reminders on how to live with the well-being of others front of mind.

I resumed our daily march, thinking about it all and how I miss Dad so much at times that I still get the lump in my throat, heaviness in my chest. I wondered as we went if I live up to what he taught, if I take every chance to think of others first, to do right by them even if I don’t know who they are. 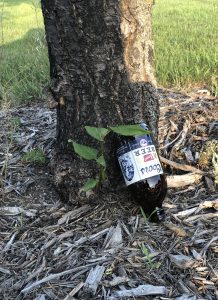 Not 100 paces farther down the strip I spotted something dark lying in the grass. It was another beer bottle, one of those brown-glass short-necks from Coors.

Here was a chance already.

I leaned the bottle against the tree.

Later that day I had my father and those bottles on my mind when my thoughts turned to coronavirus, as they do, like, a gazillion times a day.

There’s no need for conjecture about what he would have thought and done in the midst of this global pandemic.

Dad was a National Science Fair winner in high school. He believed scientists and medical professionals who for years or even decades study their areas of expertise, like epidemiology, infectious diseases and effective virus control. He heeded their advice and guidance.

Dad would have been worried about infecting others. He would have worn a mask in public.