They came for the grandchildren who will deal with the effects of the Climate Crisis for years after they’re gone. 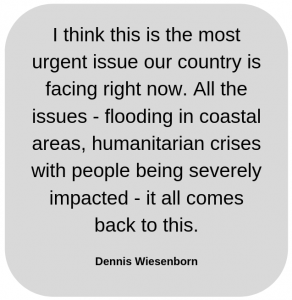 They came for their children who urged them to do something.

They came because of a need to do something about the climate crisis.

They came out of a sense of responsibility to their families, friends, neighbors and fellow Americans.

They joined hundreds of thousands of people in youth-led climate crisis strikes around the world today.

And you can bet all of them, the thousands, agreed on one thing:  government leaders need to take necessary action on the climate crisis and its devastating effects NOW.

Concerned citizens from both sides of the Red River of the North gathered in front of Fargo (N.D.) City Hall this morning in a peaceful protest demanding that leaders of Fargo-Moorhead, North Dakota, the United States and the world take action on the climate crisis immediately. 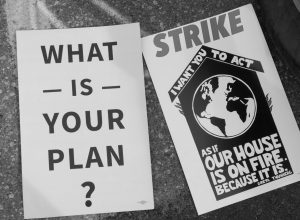 Around 75 people gathered initially, at 11 a.m., and more  joined the crowd during the 11 a.m. – 2 p.m. timeframe. The group included children as young as five to high school and college students to grandparents who are concerned for their grandkids’ futures.

Because, as Neva Francis put it, “We are in crisis. This is an emergency.”

Separately, but also in solidarity with youth around the world, students at Carl Ben Eielson in south Fargo walked out of class at 1:15 p.m. (IV Words has been unable to confirm a reported walk-out at Ben Franklin Middle School.)

Climate Crisis – Why They Strike

In addition to participating in the strike, IV Words spoke to several protesters to ask why they felt the need to make their voices heard.

We can do this, if we will.

Donna Clark said – verbally and with her protest sign – that the people and leaders of the world need to do something about the Climate Crisis, and we can do it.

Felt the Need to Do Something

Neva Francis and her children, Remi (7) and Cole (5), wore T-shirts with “Green New Deal” on the front as they joined the other strikers.

Neva and Remi wrote a letter to the editor about the need to address climate change that ran in The Forum, Fargo, N.D., on Sept. 11, 2019.

They were inspired to do so by a conference call with The Sunrise Movement, one of the sponsors/hosts of the Fargo Climate Strike.

“We’re here because it’s time to act on climate change,” Neva said, adding that after the call with The Sunrise Movement, Remi really felt they needed to do something, whatever that might be.

Seeing How Serious the Climate Crisis Is

The service-learning course is led by Minot State University Professor Amy Phillips, who has been with MiSU’s social work program on the NDSU campus since 2013.

“I wasn’t educated about it before,” Neumiller said, “but the more research I do, the more I’ve been seeing how serious it is.”